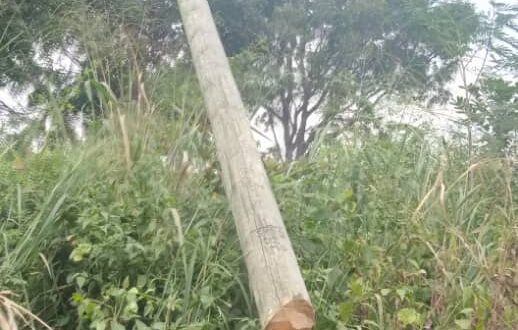 Some poles belonging to the Electricity Company of Ghana (ECG) that transmits power to some areas in the Krobo area in the Eastern Region have come under attack.

It was discovered on Friday that the poles are being vandalised by what ECG officials have described as “unscrupulous people”.

In a picture shared with Graphic Online, at least one pole has been seen cut, with a logging machine.

ECG officials accompanied by personnel of the Ghana Armed Forces were seen inspecting the damaged pole.

A source at the ECG told Graphic Online that particular pole has since been replaced and power restored.

Last week the chiefs and the people of Yilo Krobo in the Eastern Region appealed to the ECG to restore power supply to the area to save businesses and economic activities from collapse.

Since July 27, 2022, the area has been without electricity due to the decision of the ECG to cut power to the area following actions by a section of the people not to allow the company to replace their postpaid meters with prepaid ones.

Addressing a press conference in Somanya, the Divisional Chief of Okper, Nene Anyeenorgu Teye Agor IX, said the people had no problem with the ECG and would, therefore, continue to support the company in its prepaid meter installation activities.

“We want to state categorically and emphatically that no citizen of Yilo Krobo has, on record, ever resisted or confronted or obstructed the ECG in its line of duty since the company started the prepaid meter installation exercise some few weeks ago,” he said.

According to him, there had not been any reported incident of attack or threat or difficulty encountered by staff of the ECG by residents of Yilo Krobo because “Yilo Krobo citizens are law -abiding and will never do anything untoward to disturb the peace”.

“The ECG has always been working hand in hand with the Yilo Krobo paramountcy in the execution and administration of its statutory mandate and responsibility. The company has, at no time, complained to the paramountcy or chiefs of having difficulty with residents of Yilo Krobo during the ongoing installation of the prepaid meters,” the chief added.

He further pleaded with the ECG to temper justice with mercy and restore power to the area, saying: “The power outage is affecting every facet of our lives in the Yilo Krobo Traditional Area, especially Somanya, the traditional and municipal capital, where schools are suffering and every economic activity has come a halt.”

Nene Agor said the people of Yilo Krobo felt disappointed, deceived and saddened by the decision of the ECG to indefinitely shut down power, not only in communities where some people had disrupted ECG activities but also extended it to Yilo Krobo, where the people were always cooperating with the company in the deployment of prepaid meters, adding: “The effect of this general disconnection is more harmful and costly to the country than one can imagine.’’

“National Security and the Public Utilities Regulation Commission (PURC) are aware of the way Yilo Krobo is helping to resolve ECG challenges in the area,’’ he said.