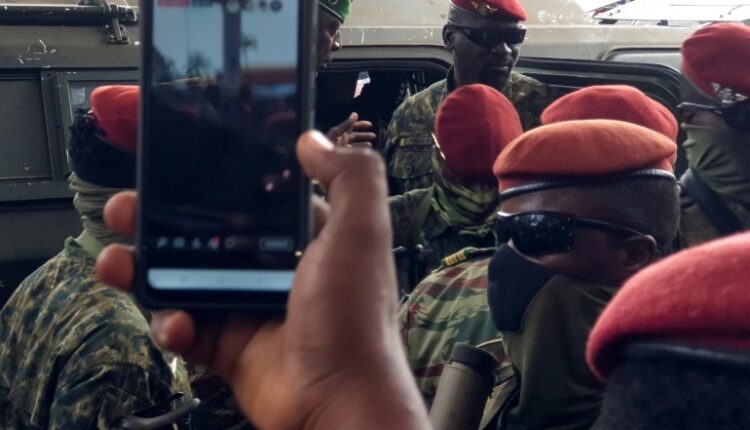 Alpha Conde, the overthrown Guinean president who has been detained by soldiers since last week’s coup, is in good health, envoys from West Africa’s main political and economic bloc ECOWAS have said during a mission to the country.

The visit by the delegation of the Economic Community of West African States (ECOWAS) on Friday came as diplomatic pressure mounted on Guinea’s ruling military in the wake of Sunday’s power grab.

ECOWAS suspended Guinea’s membership to the 15-member bloc earlier this week but stopped short of imposing further sanctions. On Friday, the African Union (AU) also announced the suspension of Guinea from all bloc “activities and decision-making bodies”.

Mediators from ECOWAS met coup leader Lieutenant Colonel Mamady Doumbouya, who arrived at the Conakry hotel where the envoys were staying flanked by special forces commandos.

ECOWAS Commission President Jean-Claude Kassi Brou, who was part of the delegation to the Guinean capital, said that mediators had also seen Conde.

“President Alpha Conde is well,” he told reporters. “Because we are mandated by the other heads of state, we are going to make a report.”

On Wednesday, ECOWAS called for Conde’s “immediate and unconditional release”. It also urged “the immediate return to constitutional order” and demanded that the security forces “maintain a constitutional posture”.

The visiting envoys planned to press the military government to appoint a credible civilian prime minister as soon as possible to help guide Guinea back towards constitutional order, a high-ranking regional official told Reuters news agency on Thursday.

The United States embassy in Conakry on Friday stated that Guinea should “immediately restore democracy”. On Thursday, the US denied involvement after a video emerged of US soldiers in a crowd of jubilant Guineans as the coup unfolded on Sunday.

The US State Department said a small US team had been involved in a joint military training exercise outside Conakry.

“Given the changing security situation, it was decided that the team would be relocated to the US embassy in Conakry. Guinean security forces provided an escort to Conakry to ensure the safe passage of the team,” the department said.

Guinea’s coup-makers have formed what they call the National Rally and Development Committee (CNRD), which has dissolved the government and the constitution.

It has also appointed army officers to head regional administrations, and on Thursday ordered the central bank and other banks to freeze all government accounts, in order to secure state assets.

Doumbouya appeared on television hours after the coup and accused Conde’s government of “endemic corruption” and of “trampling on citizens’ rights”.

He has pledged to open talks on forming a new government, but it is not yet clear when, or under what form, these may take place.

When faced with a similar predicament in Mali last year, ECOWAS imposed economic sanctions on the country, but lifted them after Mali’s ruling military committed to restoring civilian rule.

Conde became Guinea’s first democratically elected president in 2010 and was re-elected in 2015. But last year, he pushed through a constitutional change to allow himself to run for a third term, a move his opponents said was illegal. Ivory Coast President Alassane Ouattara also won a third term last year after changing his country’s constitution.

ECOWAS was criticised at the time by activists for remaining silent about Conde and Ouattara’s third-term bids.

Adama Gaye, a former information director for ECOWAS, said the bloc has been ineffective in tackling crises in the region.

“They have been sleeping on the wheels of the organisation instead of really being proactive in addressing the challenges inside its member states,” he told Al Jazeera.

“Its 15 member states have been really complacent with those that have been breaking the law within their countries from Conde to Ouattara … all of the problems at the end of the day they lead to the current situation we are seeing in Guinea, and somehow ECOWAS is coming like [the] doctor after death.”