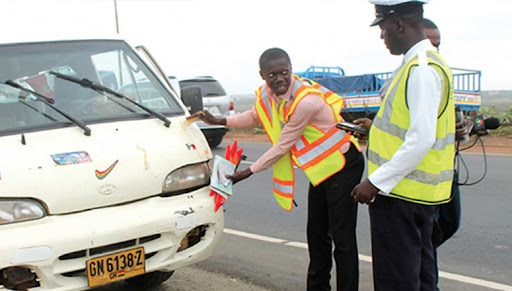 Eight motorists have been fined by the La District Magistrate Court for speeding on the Kanda Highway.

The eight are part of 18 motorists apprehended by the MTTD of the Ghana Police Service on the Kanda Highway on Thursday, July 22.

They were nabbed for driving more than the expected speed of 50 kilometres per hour and arraigned.

They were slapped with counts of exceeding the speed limit, careless and inconsiderate driving.

Eight of the drivers who were present in court pleaded guilty to the charges and were convicted on their own plea.

Meanwhile, the court has also issued a bench warrant for the arrest of the remaining 10 persons who failed to come to court.

Prosecution led by Chief Inspector Paul Osei Adjei assured that the team would soon arrest the others to face the full rigours of the law.

Section 3 of the Road Traffic Act 2004 (Act 683), which talks about careless and inconsiderate driving, states that a person who drives a motor vehicle on a road without due care and attention or without reasonable consideration for other persons using the road commits an offence and is liable on summary conviction to a fine not exceeding 2000 penalty units or to a term of imprisonment not exceeding 5 years or to both.

Road traffic fatalities seem to be rising as motorists continue to speed and engage in other road irregularities.

A total of 1,454 fatalities were recorded for the first half of 2021, according to the MTTD and the National Road Safety Authority (NRSA).

2,481 persons were also injured from motorcycle accidents from the half-year report, which is more than the 1,768 injuries reported for private vehicles.

Data from the half-year report also shows that accident cases recorded among both commercial and private vehicles, as well as motorcycles, have all increased, compared to the figures recorded for the same period in 2020.

Private vehicles equally recorded a rise in reported accidents from 4,430 in June 2020 to 5,868 in June 2021. This represents a percentage change of 32.46%, making it the highest among the three categories of accidents reported.