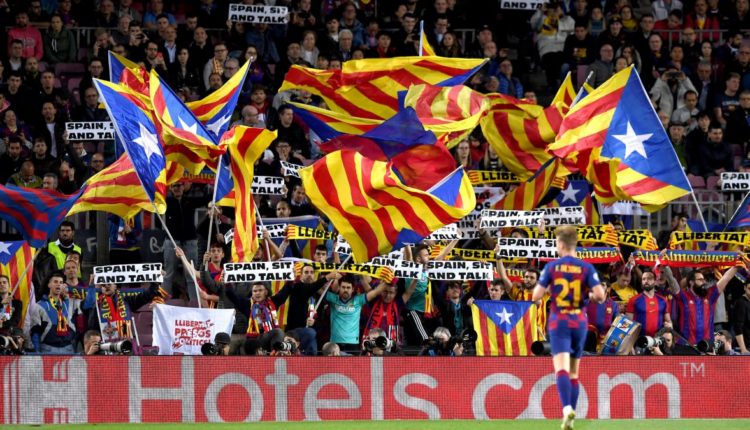 Protesters have clashed with police outside a Barcelona and Real Madrid football match at Nou Camp in Spain.

Thousands of fans inside the stadium held up banners urging the Spanish government to “sit and talk” with those demanding Catalan independence.

The match had been postponed in October over protests against the jailing of nine Catalan separatist leaders.

Many Barcelona fans and other protesters want a legal independence referendum for the region.

Before the game a secretive Catalan protest group, Democratic Tsunami, said on Twitter it would distribute 100,000 banners to fans. It also told them to bring inflatable balls and to write on them a “message for the world”.

It later posted footage of fans inside the stadium holding up the banners and chanting “freedom”.

The group is classed by Spanish officials as a criminal organisation. In October it organised mass protests at Barcelona’s airport in October and blocked a major motorway.

Meanwhile, thousands of protesters gathered outside the stadium, chanting “Independence” and “Free political prisoners”. They made makeshift barricades that were later cleared by police.

At least 12 people were reportedly injured in the clashes.

The match, known as “El Clásico”, was been due to be played two months ago but was postponed due to unrest after Spain’s Supreme Court in October sentenced nine Catalan separatist leaders to up to 13 years in prison.

The game ended in a 0-0 draw, leaving Barcelona top the league ahead of Real Madrid on goal difference.