Journalists covering the National Democratic Congress 2020 election petition have been barred from taking their mobile phones into the courtroom.

Although the use of mobile phones is barred in the courts, journalists are allowed to use their phones to file their stories.

But on this day, the NDC is filing an application to amend errors in its electoral petition filed on December 30, all journalists covering the case will however, have to wait until they step out of the courtroom to file their stories.

“The Dean of the press corps is in talks to allow us to take our phones in,” theghanareport.com’s Gloria Kafui Ahiable reported.

But the talks yielded no fruit, compelling all the journalists to drop their phones with the security.

Former President John Dramani Mahama the Petitioner and Flagbearer of the National Democratic Congress (NDC) arrived at the court around 9 am.

He has petitioned the Supreme Court to overturn the result of the 2020 elections declared by the Electoral Commission.

A hoard of lawyers in their black flowing robes and wigs have also descended on the apex court to make their cases for or against the second election petition in Ghana’s Fourth Republican history. 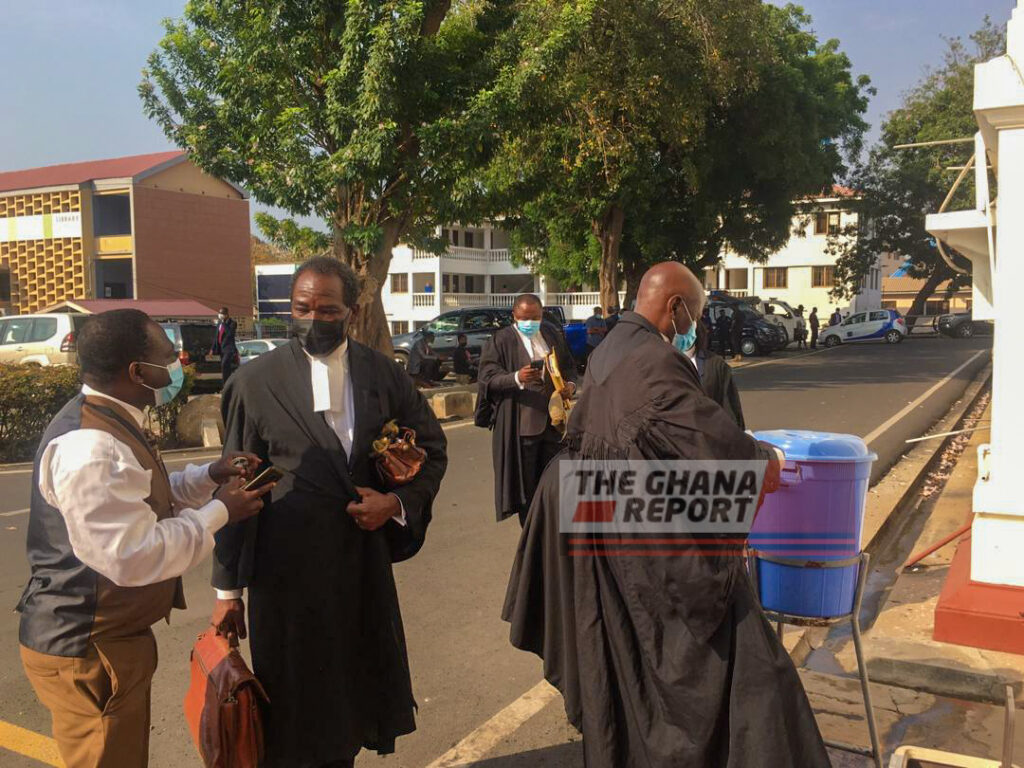 In 2012, the then New Patriotic Party Presidential candidate, Nana Akufo-Addo, went to court to challenge the result of that year’s election.

The court dismissed the case affirming the election of Mr Mahama as the duly elected President.

In a contrast of fortunes, it was Mr Mahama who is today challenging the election of the man he beat in 2012.

Ahead of the petition, security is tight at the Supreme Court where hundreds of police officers have converged.

Barricades have been created around the court with only the interested parties allowed closed to the imposing court building.

Learning from past experiences, the police has adopted the stringent security measures to prevent political sympathisers, particularly the National Democratic Congress who sued the EC, from invading the court.

About 100 armed police officers, wielding Ak 47 rifles, batons, bullet-proof vest and face masks were seen spread on all corners of the Supreme Court premises and at every entry point ahead of the court’s sitting.

In the recent past, party loyalists throng the court to support big wigs in court and end up often clashing with the police.

The 2020 NDC flagbearer John Mahama has petitioned the Supreme Court to declare a run-off in the December 7 presidential elections.

A petition filed by his legal counsel, Tony Lithur, says his client has evidence that no candidate satisfied the constitutional requirement to be declared president.

By law, a candidate must obtain 50% plus one to be declared winner of the presidential elections.

But rejecting the results, John Mahama has maintained they were fictionalised and fraudulent.

A portion of the petitioner’s claim reads;

After resorting to Street protests for days, the party had finally taken its case to the Supreme Court.

The counsel for the petitioner wants the Supreme Court to order an annulment of the December 9 declaration by the EC and an injunction on President Nana Akufo-Addo from holding himself as president-elect.

But in response to the petition, President Nana Addo Dankwa Akufo-Addo and the Electoral Commission has asked the Supreme Court to dismiss the suit filed by the NDC Flagbearer, John Dramani Mahama, challenging the results of last year’s presidential elections.

In a separate response, the two respondents urged the apex court to dismiss it as it does not measure to the legal criteria and it is devoid of substance.

According to the President, the petition submitted by the NDC Flagbearer is “incompetent, frivolous and vexatious, and discloses no reasonable cause of action in terms of article 64(1) of the constitution.”

“The instant action is a ruse and face-saving gimmick by the petitioner, after the petitioner and many senior members of the NDC party had prematurely claimed outright victory in the election, only to be badly exposed by results of the 1st respondent (EC), corroborated by all media houses of note in the country as well as many independent local and international observers,” Excerpts of the response from the President read.