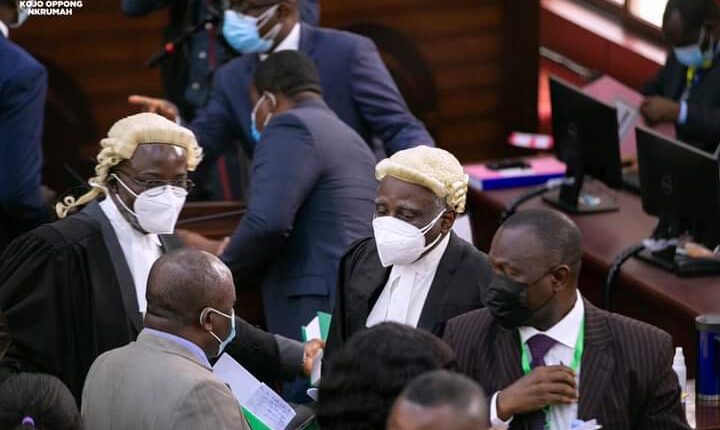 Counsel for the Petitioner in the ongoing election petition hearing has notified the court of its intention to file a subpoena to compel the EC boss Jean Mensa to testify.

Tsatsu Tsikata, who is the NDC Flagbearer John Dramani Mahama’s lead counsel, made this known after the Supreme Court read its ruling that EC boss cannot be compelled to  testify.

The subpoena, Mr Tsikata seeks to file will compel the Chairperson of the Electoral Commission, Jean Mensa to mount the witness box and be cross-examined by the petitioner’s legal team.

Mr Tsikata also said it will file for a review application regarding the court’s ruling of not compelling the respondent’s witness to testify.

In effect, the petitioner’s team will have to re-open its case in order to have a subpoena served on the EC Chairperson.

“My Lords, we know that we can issue a subpoena without leave but since we have closed our case on the assumption that the EC Chairperson will mount the witness box we seek to to re-open our case.

“Mr Lords, we intend to file a formal motion, for all these processes to be determined and with your permission we seek to do so,” Mr Tsikata told the court after it tossed out the request to cross examine EC boss.

The Chief Justice Anin Yeboah granted his request and said it cannot stop petitioner’s legal team from filing its processes.

Meanwhile, the court has adjourned the case to February 18, to hear the closing arguments from all parties.

The parties are expected to file their closing addresses on Wednesday, February 17, 2021 before the next adjourned date.

Court’s ruling on whether EC boss should testify

The Chief Justice Anin Yeboah read out the detailed ruling of the seven member panel on Thursday, citing many authorities and disapproving some of the legal authorities cited by the Petitioners lawyer.

The court was of the view that there was no law that forces the apex court to subject a witness to testify against his or her will.

The court said it cannot extend its mandate beyond what the law mandates them to do so therefore cannot employ societies laws to subject the witness to testify.

Also, the court said that filing the witness statement does not mean the Electoral Commission must bring forth its witness because the statement is yet to be taken as evidence.

The apex court made reference to the Nyamekye versus Ansah 1989/1992 Ghana law report page 154, a ruling, which said “a party to an action need not give evidence himself, provided he can give evidence from other sources, the court will give its ruling based on the evidence before it.”

In the said case, the court held that a case is won on the strengths of the plaintiff and not the respondents.

He sided with the respondents that the burden of proof lies on the petitioner (John Mahama) and can only be shifted when that condition has been satisfied.

The seven member panel was also of the view that the EC Chairperson’s constitutional office does not mean a certain form of rule should apply and not the law.

Again, regarding the depositions in affidavit in opposition to interrogatories filed by the respondents, the court said the responses of assurance for cross examination does not make the respondent (Jean Mensa) compellable.

Justice Anin Yeboah maintained that no provision in the constitution or statute has been pointed out to show the EC chairperson is subject to different rules contrary to settled rules of procedure and settled practice.