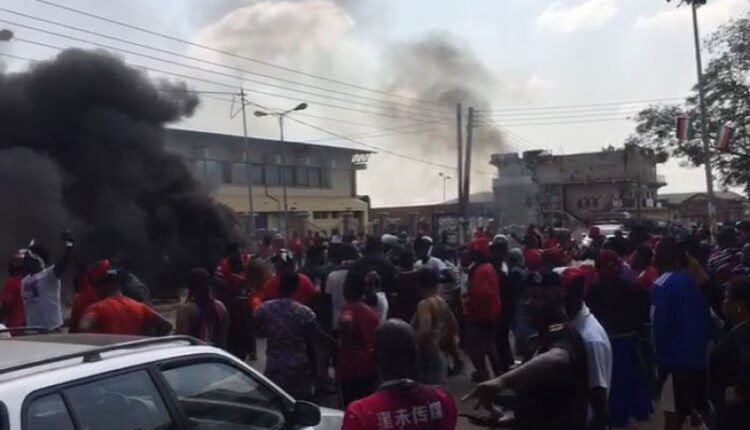 Military and police personnel had a hectic time controlling demonstrating supporters of the main opposition party, the National Democratic Congress (NDC), as they resorted to the burning of tyres at the Jubilee Park, Kumasi, on Sunday.

The demonstrators, clad in red, had converged at the Park, following a procession through some principal streets of the metropolis to protest against the 2020 Presidential election results.
They were led by the Ashanti Regional Executives of the party and some leaders, including; Dr Samuel Sarpong, former Regional Minister.
No sooner had they converged on the Park than some of the protesters started burning tyres at the forecourt and on the streets, billowing huge smoke into the air.
This forced the Labour Roundabout-Roman Hill stretch of the road to be closed temporarily, creating traffic congestion, but a combined team of the police and military moved in quickly to quench the fire.
The ensuing action nearly triggered a clash between the demonstrators and security personnel, as the latter tried to bring the angry protestors under control.
In the heat of the confusion, the military and anti-riot police had no option than to use some level of force to cow the angry supporters into submission.
They then restricted the demonstrators’ movement to the inner perimeter of the Jubilee Park, thereby clearing the road of the nuisance, while the NDC leaders addressed the gathering.
Mr. Kwame Zu, the Regional Secretary, NDC, in an interview with the Ghana News Agency (GNA), on the sidelines of the protest, described the action of the security personnel as unwarranted.
“We have the right as a party to register our displeasure at the Presidential results,” he noted, saying the summation errors and wrong percentages with figures in some of the constituencies across the country, called for a review.
“The EC must come out boldly to admit its own mistakes with the calculations relating to the Presidential results to enhance the credibility of the December polls,” he said.
NDC activists in the country had been embarking on a series of demonstrations, following the EC’s declaration of Nana Addo Dankwa Akufo-Addo as the President-elect in the recent polls.
Story By GNA
Election 2020GhanaNDCNPP
You might also like
Headlines