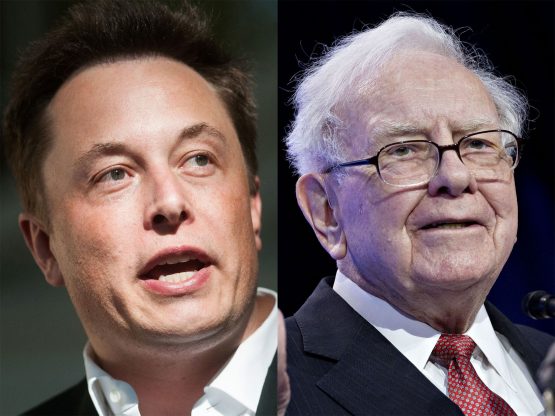 Musk’s net worth rose by $24 billion to $335.1 billion Monday as the electric automaker’s shares jumped 8.5% in New York. That widened his lead over Amazon.com Inc.’s Jeff Bezos as the world’s wealthiest person to $143 billion, according to the Bloomberg Billionaires Index. Buffett, chairman of Berkshire Hathaway Inc., ranks 10th with a net worth of $104.1 billion.

Up and down Tesla’s shareholder roster, fortunes are ballooning. Singapore-based retail trader Leo KoGuan emerged last week as the company’s third-biggest individual shareholder, rocketing him up the wealth ranks with a net worth valued at $12.1 billion. Larry Ellison, who spent 44 years building software maker Oracle Corp., has only been a big investor in Tesla since 2018, but his stake is now worth $18.1 billion, almost a quarter the value of his Oracle holding.

Tesla’s Hidden Billionaire: How a Retail Trader Made $7 Billion

Buffett’s prodigious philanthropy helps explain some of the growing gap between his and Musk’s fortune. The value investor has donated a portion of his Berkshire stock every year to various charitable organizations, including the Bill & Melinda Gates Foundation. Buffett, 91, said in June that the value of his gifts over the past 16 years totaled $41 billion.

Musk, 50, weighed in on philanthropy over the weekend on Twitter, responding to a United Nations World Food Programme director who had challenged billionaires like Musk to step up to prevent starvation. Musk responded by saying he would sell Tesla stock worth $6 billion “right now” if the U.N. agency could outline how it would use the money to solve world hunger.