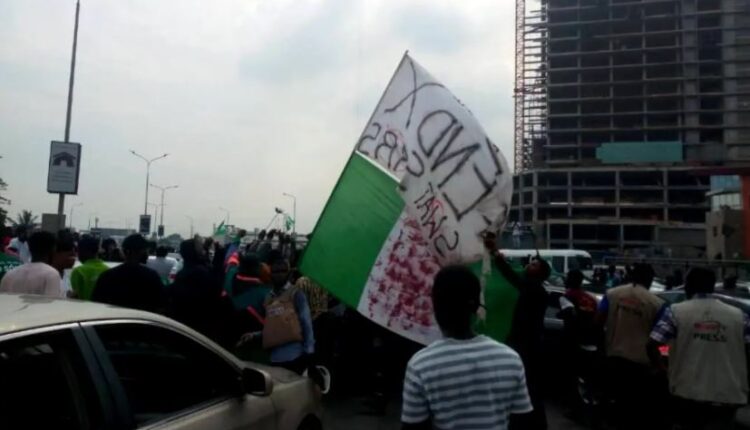 In commemoration of the maiden anniversary of the #EndSARS protest which led to the alleged killing of some protesters by the Nigerian Army exactly one year of the alleged incident at the Lekki Tollgate in Lagos, Global Rights Nigeria pointed issues why the protest should not be forgotten.

In a statement signed by Country Director, Global Rights Nigeria, Abiodun Baiyewu, and made available to Vanguard, recalled how the protest sparked up and led to horrible and harrowing experiences as youths took to the streets to protest police brutality, and how it was hijacked by hoodlums and sponsored protesters, which led to unexpected destruction of lives, property, and businesses belonging to private and public organizations.

The statement reads in part, “Today marks a year since the tragic incidence, and it’s a solemn day of remembrance. Today, we remember and honor casualties of attacks against the protests. Not only the Lekki Tollgate massacre but across Nigeria.

“However, the protests were tragically truncated by sponsored thugs counter-protesters and state-sponsored miscreants. At its height, on the evening of October 20, 2020, the Nigerian army shot at unarmed, peaceful protesters who were sitting on the floor at Lekki Toll Gate in Lagos, waving Nigerian flags.

“We also call for the release of more than 300 victims arrested by the Nigerian government for participating in the protests. We promise to NEVER FORGET. Promise us YOU will NEVER STOP SPEAKING UP #EndSARS, #SoroSoke, #ProjectNigeria.”

The statement, however, pointed and maintained that the movement continues until demands for good governance are implemented.

“The #EndSARS protests may have come to an end, but the movement is alive and well, awaiting an opportune moment. #EndSARS was and is a success. At least from where we stand at Global Rights.

“From where we stand, Nigerians won. They got tired of the status quo and decided to do something about their frustrations and oppression. They went troubleshooting and found the real root of Nigeria’s governance challenges: Impunity.

“They called it what it is, distilled it into a movement, and demanded accountability. They reclaimed their country. They filled their space and their role as citizens, demanding accountability of public officers.

“The best part was that they mobilized themselves and were united in their common purpose. It didn’t matter which ethnic group you came from or your religious inclination – you were first Nigerian, and that was all that mattered. They displayed leadership at its finest.

“They led from the center, refusing conventional labels and protocols that could mar group dynamics. So inspiring were they in their unity that the rest of the world had to pause and take note. It felt like Nigeria was on the cusp of birthing its democracy.

“Whether on the streets, on Twitter, in financial contributions to the movement, or just the spirit of “Najia” (as we fondly call Nigeria) applauding as they sought for a state that truly, truly defined them as Nigerians.

“Now the #EndSARS protests were not perfect, there was a lot we all could have done better. Not just the young people out on the streets – the whole lot of us and the international community.

“As we commemorate the first anniversary of the Lekki Tollgate massacre in our different ways, we invite you to join in: reflect on what the protest means, celebrate its wins, learn from its mistakes, be energized by the glimpse of Naija as it could be, catch a glimpse of yourself and what your role should be in the mirrors of these reflections to help protect rights, and reclaim our civic space.

“Let us be clear: It is going to take more than banning Twitter, gagging the media, or throwing security forces out to quash the Naija spirit or the swag of these beautiful ones who have finally been born and will birth their own country”, it added.