Story By Sefanam Agbobli / s.agbobli@theghanareport.com On Jan 22, 2021
Share
One of the hearing and speech impaired persons washing a car

“The owner has done well. It’s a laudable idea. We all have some form of disability, and so their disability does not matter. All that matters is that they’ve got a decent job to do,” Cynthia Morrison told theghanareport.com.

This was after theghanareport.com’s exclusive report on these young men who work as attendants at the washing bay located at Lapaz in Accra.

At the washing bay, more than half a dozen boys work assiduously and in uncharacteristic silence.

The loudest noise is the fizzling sound of the waterhose splashing the cars, stripping it of dirt and dust. Beyond this, the other observable activity is gesticulations.

And it is because the car wash attendants there do not speak and cannot hear. They have speech and hearing impairment.

The minister, like others who came across the story, expressed their satisfaction with the inclusion of the disabled in the organization. 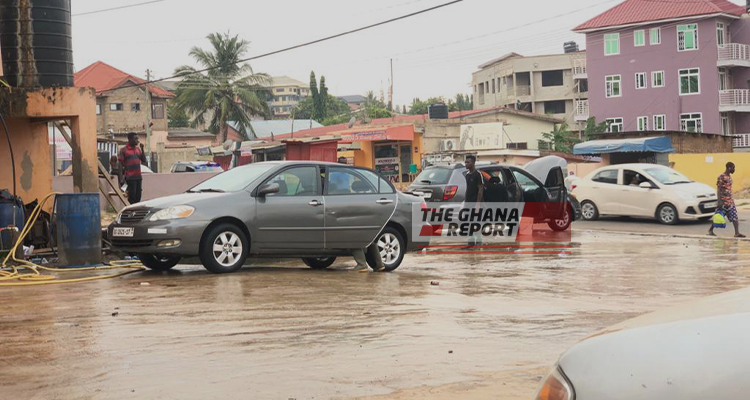 She said due to her engagement with persons with disability, “they are very faithful people, and they’re very committed to whatever you ask them to do”.

In Ghana where unemployment can best be described as a national security threat, Madam Morrison encouraged other organizations to consider employing PWDs to help them fend for themselves.

“They’re human beings like us, but it is just unfortunate that they have a disability. I wear glasses, and mine is also a disability. But does it mean they should put people with glasses in one particular institution?” she quizzed.

These young adults started working at the washing bay after one of them had discovered the place and thought it was a place for his kind to work and make some money.

The discoverer, who had completed the Akropong School for the Deaf, then started bringing in his mates.

The owner of the facility, who was at the time working with abled-bodied men fell in love with the hard work of the young men with hearing and speech impairment.

Manager of the facility, Albertha Manu, told theghanareport.com that the owner had earlier employed persons without disability, but later realized he could not cope as much with them.

At the time, he had one PWD and was awed at his dedication to the work. He finally settled on PWDs and made them a majority of his workforce.

According to the manager, the disabled are diligent in their work which always earns them some tips from customers.

Due to their dedication to the work, the owner of the facility then decided to employ a majority of their kind.

Currently, 10 of such young adults work at the Pesarco Washing Bay located at Race Course near Lapaz.

Some of the boys have completed Senior High School (SHS) while others like Kojo, who spoke to theghanareport.com through a sign language interpreter is still in school at Akropong.

For Kojo, his only aspiration is to be a teacher to help children with speech and hearing impairment.

In order to achieve this, Kojo says he will enrol at the University of Education after he completes his SHS education.

However, he does not have the money to pay for tertiary education.

And so, he works as a washing bay attendant to save some money to cater for this dream.

He, like some others, is an orphan. He fends for himself to afford even a one-square meal.

The story of Kojo is one filled with ambition. But for persons living with disability, though the dreams may be brighter than the sun, the chances of achieving these goals are slim.

In the Ghanaian world where little opportunities abound for such persons, the success stories of such persons can be likened to limited editions of luxury brands. They are simply one in a million.

Despite these challenges, Kojo and his friends are determined to reach the top with their disabilities to once again give true meaning to the saying, “disability is not inability”.