Multiple sources have confirmed her death but details are scanty about when she departed.

However, Madam Victoria Agbotui is reported to have died at home and her body is currently under preservation at the Lashibi Funeral Home.

She recently celebrated her 101 birthday.

She was born at  Dzelukope, a coastal town near Keta, in the Volta Region.

In May last year, news of the centenarian’s death was widely publicised by the media but it turned out to be a hoax.

In a swift response, the former President’s Office discredited the rumours saying  “Madam Agbotui is alive, hale and hearty”.

Madam Agbotui first appeared on the political scene in 1979 when her son overthrew the Supreme Military Council II led by General F.W. Akuffo.

At the time, she was the head of House Keeping at the Osu Castle. A position she held during part of her son’s tenure.

But she largely stayed out of the limelight.

The former President has never ceased to credit his mother with his upbringing.

In a recent interview, he said he never felt a void growing up because of the absence of his Scottish father.

“When you have a mother like Ms Agbotui, there is no void.  She is everything. Eiiii! Aunty Vic. No, no!,” He said with a wide grin.

On political discussions, he said there was an undiscussed code which meant that the two did not have conversations on the subject.

“No we didn’t discuss politics in away but I think she always knew that I was unhappy about the way things were going in the country. I don’t think she thought I would go that far, actually,” he said on his two coups that overthrew General Akuffo and the late President Dr Hilla Limann.

YOU MAY ALSO BE INTERESTED IN: Full Transcript: Rawlings On Childhood Dreams & Coups 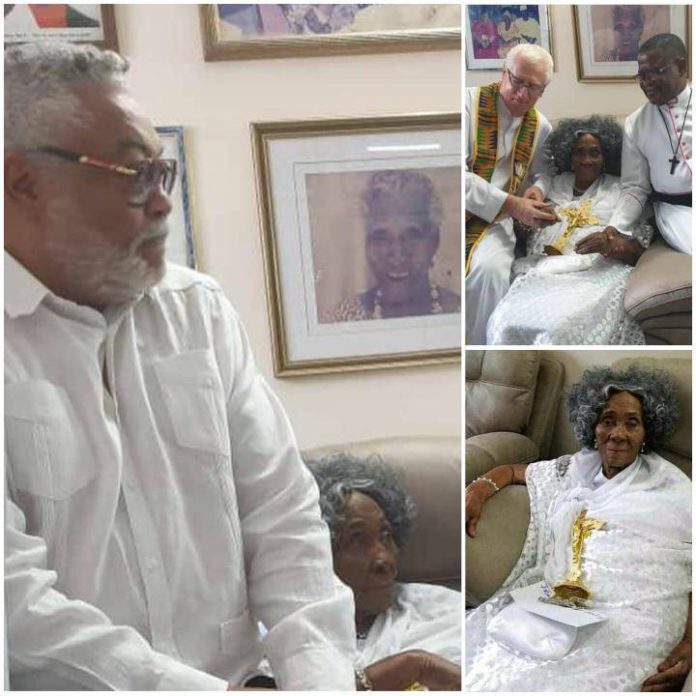