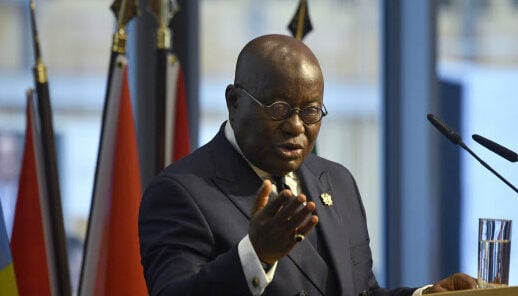 President Akufo-Addo has challenged individuals against the methods deployed to clamp down the activities of illegal miners to seek redress in court.

The government has deployed 400 soldiers to confiscate and burn equipment, including excavators and changfang machines detected at a 100-meter radius of water bodies where illegal mining (galamsey) activities are prohibited.

More than 500 pieces of equipment have been destroyed as part of Operation Halt to end illegal mining.

This modus operandi has been greeted with some opposition, but President Akufo-Addo holds a contrary view.

“I know there are some who believe that the ongoing exercise of ridding our water bodies and forest zones of harmful equipment and machinery is unlawful and, in some cases, harsh.

“I strongly disagree, and I would advise those who take a contrary view to go to court to vindicate their position if they so wish. That is what the rule of law is all about,” President Akufo-Addo said.

The President further urged Ghanaians, including those advocating for the protection of illegal miners, to channel their support to the government’s fight against the age-long menace.

He explained that any person who, without a valid license, conveys any equipment onto a piece of land purportedly to conduct search, reconnaissance, prospecting, exploring, or mining for a mineral, commits grievous crimes against the law.

“The presence of changfans in water bodies is illegal, as is the unlawful use of excavators in protected forest zones. The devastation caused by these equipment is nothing short of evil, and we should not compromise in our efforts to protect our environment, forest reserves, and water bodies,” he voiced out.

Making a call for the support of all in the fight against galamsey, the President said, “I appeal to all Ghanaians, including the opposition who are so doing, to rally behind government in its efforts to stamp out far-reaching illegality and criminality, rather than advocate for the protection of non-existing rights of persons caught in this evil activity.”

He used the occasion to applaud the Operation Halt team. He said, “Let me pause to pay tribute to officers, men and women of the Ghana Armed Forces who have stepped forward to perform their patriotic duties in this exercise. They deserve the laud praise of the nation.”

President Akufo-Addo was speaking at a sod-cutting ceremony to commence a Law Village Project in Accra Wednesday, May 26.

The government launched ‘Operation Halt’ in a renewed fight against galamsey, and their operations began on Wednesday, April 28, 2021, in the Central and Western Regions.

Despite an initial war waged against the galamsey menace, the illegal practice continues to threaten the environment, polluting water bodies and depleting the country’s forest reserves.

In recent times, Ghana’s cocoa sector is facing a crisis because of the ripple effects of the activities of illegal miners.

Meanwhile, small-scale miners have issued a seven-day ultimatum to the government to end the destruction of their properties, or else they would respond with a demonstration.

“We are giving the government 7 days to address these concerns. If nothing is heard from them, we will embark on a three-day nationwide demonstration,” The Small-Scale Miners Association said.

Its Communications Director for the association, Abdul Razak Alhassan, explained that the military was terrorizing its operations in a press conference.

According to him, they are exempted from action by the military recently deployed to clamp down illegal mining activities because their sites are not close to river bodies.

Addressing the media at Ntaferewaso in the Twifo-Atti Morkwa District of the Central Region, he said, “ the military was deployed to specific river bodies, but we are seeing a situation where they veer into communities with licensed small-scale miners and end up burning their equipment”.

This latest action to fight the menace, popularly known as galamsey, comes after the Stakeholder Dialogue on Small Scale Mining.

Shortly after the first Akufo-Addo administration commenced in 2017, a joint military and police task force known as Operation Vanguard was unleashed to combat illegal mining.

However, the desired results were not achieved despite some successes achieved by the joint team.

It was believed that the withdrawal of the military from the joint task force was to allow restrategizing by the government in the fight against illegal mining.

The task was left in the hands of the police.

Despite their operations, there are still activities of illegal miners dotted across the country.

After four years,  the government is under pressure to highlight the positives following several scandals.

The Criminal Investigations Department (CID) of the Ghana Police Service concluded in their report that Mr Bissue did not circumvent laid down processes.

Touching on the Law Village, President Akufo-Addo indicated that the $55 million project, when completed, “Will expand access to legal education, without compromising on its quality, and ultimately, assist in the administration of justice throughout the country.”

“As many lawyers that are trained, it is my hope that, indeed, many more of them will join the public sector to enhance the quality of legal service delivery in the country,” he said.

The President reiterated the government’s resolve to leave a legacy in professional education in the country and assured that the project was “the beginning of greater things to come for the Ghana School of Law.”

Phase one of the project would see the completion of the Accra Main Campus (Makola) at the cost of $4 million, with a 1,500 seating capacity, a number of lecture halls, a well-resourced library, residential facilities, and offices.