New details have emerged about the robbery on a bullion van near Jamestown.

The video, which is currently under scrutiny by state security agencies show how the criminals executed their well-planned operation strategically. 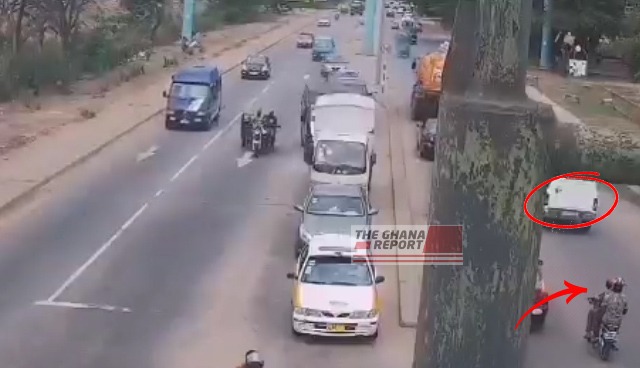 The six robbers on three motorbikes followed the vehicle for several minutes around town before pouncing on the occupants at Adedenkpo, a suburb of Jamestown in Accra.

At 11:52 am, they were captured around the Bishop Bowers Junction, heading to Accra at a safe distance behind the bullion van. 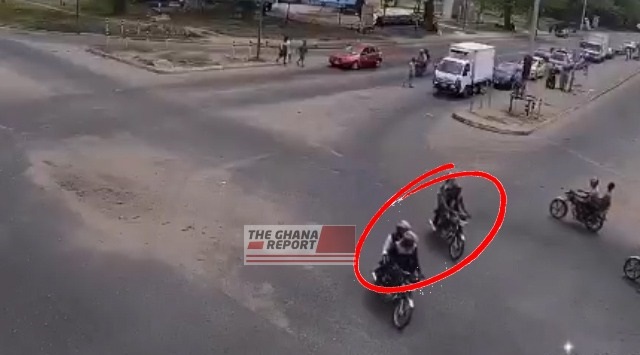 Their movements seemed to have been timed according to a plan.

The bikers interspersed with about seven commercial and private vehicles in a way that raised no suspicion along the route of the bullion van.

Road users were going about their normal activities along the stretch since it appeared the eventual assailants were ‘okada’ operators with pillion riders.

A little after 12 pm, the van made a turn at the Korle Bu Junction and drove across the Korle Lagoon bridge towards Jamestown.

At a traffic stop at Adedenkpo, the bullion van halted, and the lead motorcycle bypassed the car. 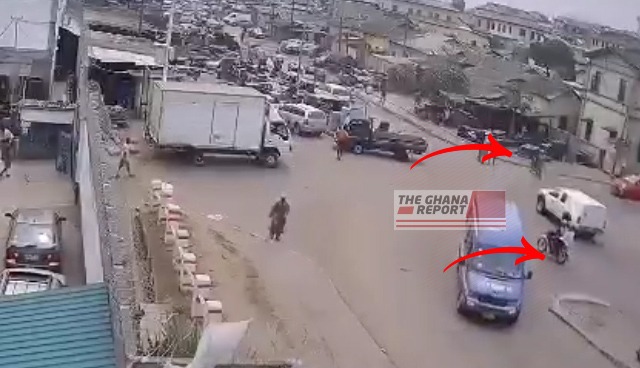 The others followed, and they eventually sandwiched the bullion van at a crowded area where they unleashed their deadly attack.

In the process to rob the van of the cash contents, they shot the police escort dead on the spot.

A young lady, Afua Badu, who witnessed the incident, was not spared by the ruthless squad.

The bullion van driver sustained severe injuries while two ladies at the back of the van managed to escape unhurt.

A few minutes later, the people in the vicinity were seen fleeing in different directions without paying attention to oncoming traffic, to save their lives.

The three motorcycles were seen moving at top speed from the scene amidst indiscriminate firing of gunshots. 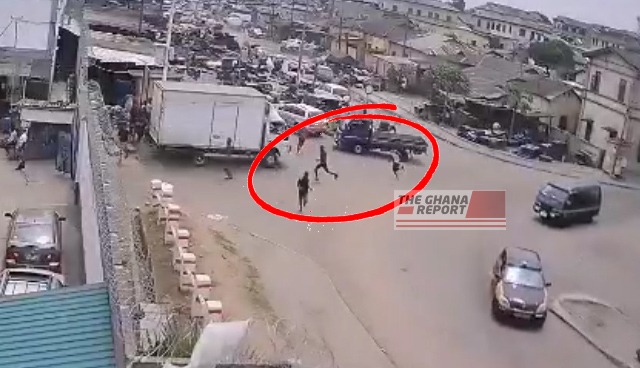 They were spotted again at Korle Bu Junction at about 12:08, as they escaped with their booty in the direction of the Bishop Bowers Junction, video shows.

According to the police, the unidentified armed men on several motorbikes crossed the bullion van, which was on a pay/collection errand, at about 1100 hours at Adedenkpo, a suburb of James Town.

The robbers shot at the police officer on escort duty in the van, killing him instantly.
The armed men also fired sporadically in the air and on the driver, who sustained gunshot wounds.

A hawker was also killed by the armed men when one of two ladies on the bullion van stepped out and ran in the deceased seller’s direction.

A lady at the back of the van, identified as a teller of MON-TRAN, escaped unhurt.
However, she was sent to the hospital to be treated for trauma.
Investigators visited the crime scene and retrieved 17 spent shells.

Four persons are said to have been arrested in connection to the crime.
Collins Addae aka Kekye; Ebenezer Gyimah, aka Peace; Musa Kamara, 26; and his brother Suleman Ketah, 26, alias 69, both from Guinea.

They were arrested in a joint police operation at their hideouts in a mining site at Kyebi in the Eastern Region on Saturday, June 26.

One suspect at large

Meanwhile, the police are still in search of one of the suspects currently at large.
According to reliable sources of Theghanareport, an Accra Circuit court has issued a warrant for the arrest of Hakam, popularly known as ‘Red Devil’ who is believed to be hiding in Tamale, Yendi, Kumasi, Accra or Tema.