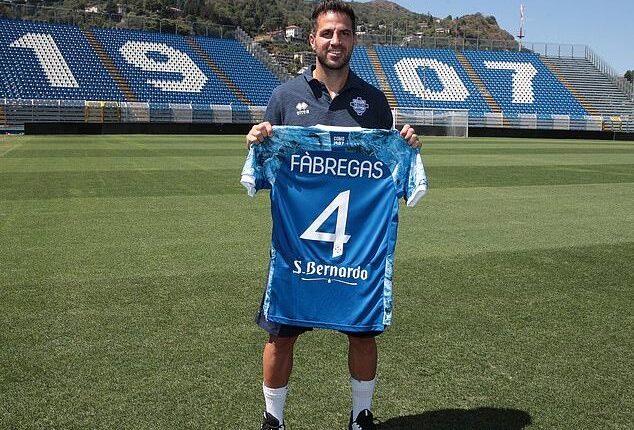 Fabregas joins Serie B side Como

Cesc Fabregas has completed a surprise move to Serie B side Como.

The 35-year-old put pen-to-paper to a two-year deal and arrives on a free transfer after his contract with French side Monaco expired in June.

Speaking at his unveiling the former Arsenal man was full of praise for his new club:

‘It is an honour and a pleasure to join Como 1907, I have been extremely fortunate that my career has allowed me to play at the most wonderful clubs. Como is no exception. After lengthy talks with Mirwan, Dennis and Charlie, they explained in detail one of the most exciting and ambitious projects in football.

Como filed for bankruptcy in 2016 and were only re-founded when a new company took charge of the club in 2017.

They were thrown into the Serie D amateur division that same year, before being taken over by London-based company SENT Entertainment in April 2019.

Fabregas is undoubtedly a marquee signing for the club and the midfield maestro brings a wealth of experience to a club in Italy’s second tier in the winter of a glittering career. The former Arsenal, Chelsea and Barcelona man won 13 major trophies in club football, including the Premier League, FA Cup, La Liga and the Europa League.

He played 110 times for Spain winning the European Championships twice and the World Cup.