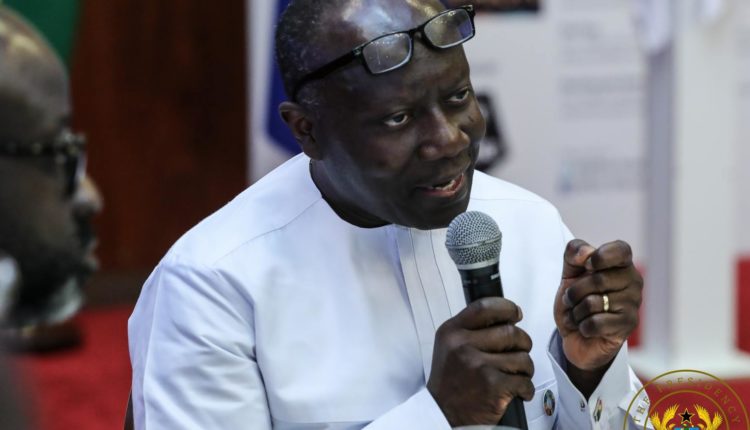 Finance Ministry engages TUC, CLOGSAG, others on the 2020 budget

Ken Ofori-Atta, the Minister of Finance, has welcomed a number of inputs from the Organized Labour for consideration into the 2020 budget presentation.

Speaking at a meeting which involved the Minister for Employment and Labour Relations, Hon. Ignatius Baffour Awuah and organized labour, he said, government recognizes the important role stakeholders play in the development of the nation, hence, the Ministry brought them together to brainstorm to come out with ideas and recommendations on how to move the country forward.

“As we achieve more together, we are mindful of some of the challenges that you may be facing and I will entreat us to have a dispassionate engagement as we chart the way forward for 2020 and the medium term”, the Finance Minister noted.

He mentioned some key areas that have been prioritized in the 2020 budget as the Presidential and Parliamentary elections, security-related expenditures, government flagship programmes, funding the Secretariat of the African Continental Free Trade Area and road infrastructure development.

“The year 2020 will also witness the full roll-out of the Free SHS programme which will definitely require an increase in the allocation of resources for its full implementation”.

It would be recalled that the Ministries of Finance and Employment and labour Relations representing government signed a Social Partnership Agreement with organized labour made up of Ghana Employers Association and Trades Union Congress for stronger collaboration, harmonized industrial relations and government policies. This meeting was to further deepen the relationship between government and its social partners.

Government also met with Public Services Joint Standing Negotiating Committee and successfully completed labour negotiations. From next year, public sector workers will enjoy a 40 per cent increment in categories Two and Three allowances, in addition to a 12 per cent increase in base pay. The National Daily Minimum Wage (NDMW) has also gone up 11 percentage points over the 2019 NDMW of GH¢10.65 to GH¢11.82 effective January 1, 2020.

“In spite of the successes chalked, there had been some agitations on the labour front and Government was committed in resolving these issues and ensure no worker was made worse off,” the Minister assured.

The Secretary-General of Trades Union Congress, Mr. Yaw Baah who expressed delight at the Minister’s invitation for inputs, enumerated several issues worth considering into the 2020 budget.

These included the establishment of labour banks which would solely cater for the housing and other needs of government workers.

To tackle the mounting challenge of unemployment in the system, the Secretary-General recommended the provision of rebate for Small and Medium Enterprises that employed graduates.

Mrs. Perpetual Ofori-Ampofo, Deputy Chief Health Tutor at the Nursing and Midwifery Training College under the Ghana Registered Nurses and Midwifery Association said it was vital for government to consider the provision of incentive packages for health personnel posted to the rural areas and institute a system of reposting them after serving between three and four years.

She underscored the need for government to ensure prompt payment of arrears of National Health Insurance Scheme operators.

According to her, for Ghana to achieve the Universal Health Coverage by 2030 under the SDGs, it was imperative for government to address all challenges with the NHIS and improve on health infrastructure.

Inputs from other speakers centered on how government would check the proliferation of counterfeit products on Ghanaian markets which posed a health risk and revenue challenges, how government handled contracts with external parties, the need to resource the security to effectively handle piracy menace in the textile industry among others.