Five market trends investors are focused on for the second quarter

The first quarter of 2021 kept investors on their toes as it served up surging yields, an accelerated rotation into cyclical stocks and wild rides in the shares of GameStop that brought the retail investors of WallStreetBets into the public eye.

Here are some trends investors are positioning for in the second quarter, and how they could impact broader markets. 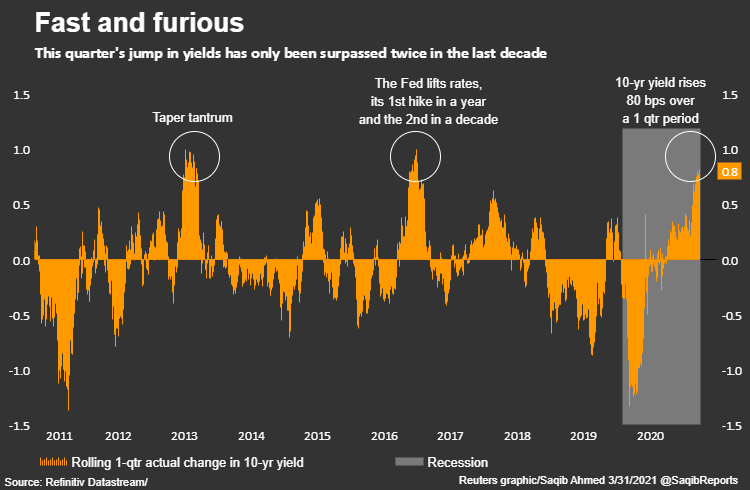 The yield on the benchmark 10-year U.S. Treasury rose by about 80 basis points in the second quarter – its third-largest quarterly increase over the past decade – as investors sold bonds in anticipation of a U.S. economic recovery and higher inflation.

Many investors believe the move will continue – Goldman Sachs sees the yield at 1.9% by the end of 2021, while TD Securities expects yields to rise to 2%.

The move “is happening, we believe, for the right reasons,” said Gargi Pal Chaudhuri, head of iShares investment strategy, Americas at BlackRock.

Chaudhuri believes further upside in yields is unlikely to derail a rally that took the S&P 500 to a fresh record on Wednesday, as yields are rising from “very, very low levels.”

Others are less certain. Forty-three percent of investors in the most recent BofA Global Research fund manager survey said 2% on the 10-year could trigger a selloff in stocks. 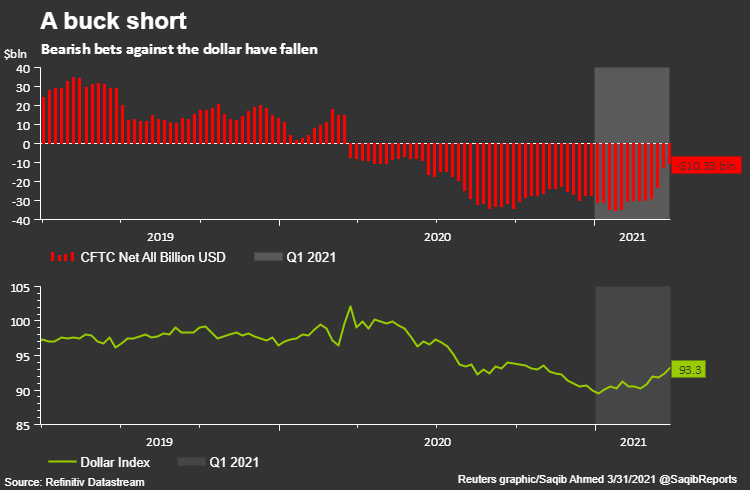 Rising yields have helped lift the dollar to its highest level in nearly 17 months, and some investors have positioned for more dollar strength ahead: net bets on a weaker dollar in futures markets stood at $10.3 billion, about a third of their mid-January value, the latest data from the CFTC showed.

A strengthening dollar could weigh on the profits of U.S. multinational companies and spell bad news for the recent commodities rally that has pushed up prices for everything from oil to copper and iron ore. 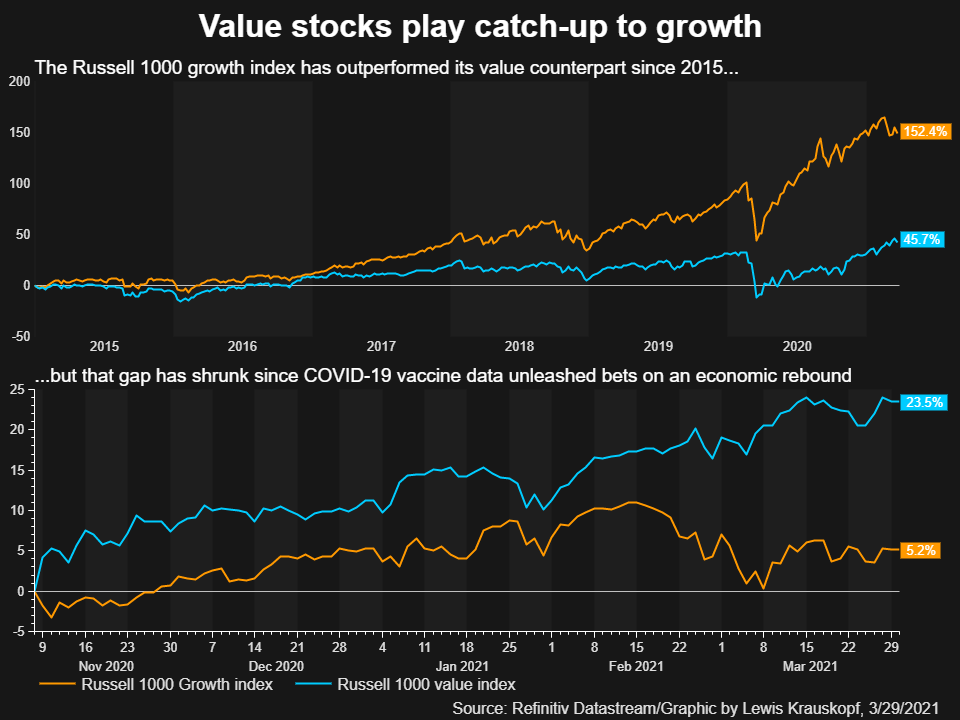 Expectations of a U.S. economic revival have boosted the so-called reopening trade in recent months, fueling rallies in the shares of banks, energy companies and other areas that have for years lagged behind growth and technology stocks.

The Russell 1000 value index rose 11% in the first quarter against its growth counterpart’s gain of 1%, continuing a trend that started at the end of 2020.

Hiccups in the U.S. reopening effort, however, could reinvigorate the appeal of tech, sending investors back to the stocks that have led markets higher for years. 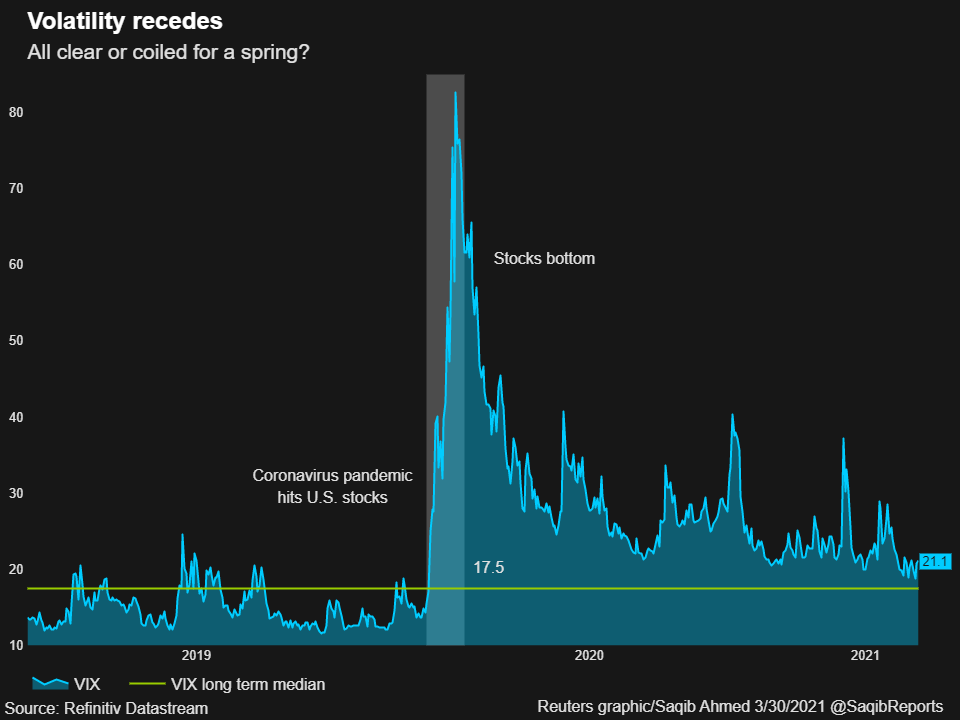 The quarter also marked a much-awaited drop in investors’ expectations for stock market gyrations. The Cboe Volatility Index – known as Wall Street’s fear gauge – recently traded just below 20, down from a near-record of 85.47 a year ago.

The index remains above its long-term median of 17.5, likely a result of some investors hedging their stock positions using S&P index options, Overby said. 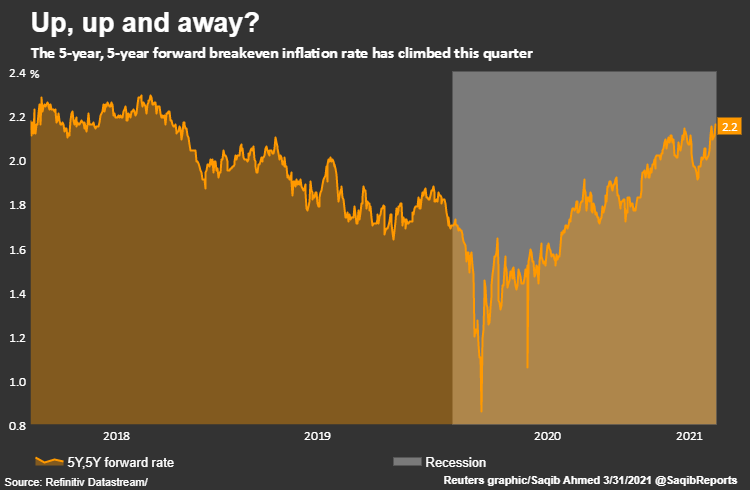 Although inflation has consistently averaged below the Federal Reserve’s 2% target in the last decade, trillions of dollars in government spending have revived discussions of its return.

One measure of inflation, which tracks the expected average rate over the five-year period starting five years from now, is at 2.16%, the highest since December 2018.

The latest survey by BofA Global Research, meanwhile, showed fund managers see a rise in inflation – which could weigh on the dollar and erode demand for longer-dated bonds – as the market’s biggest “tail risk.”