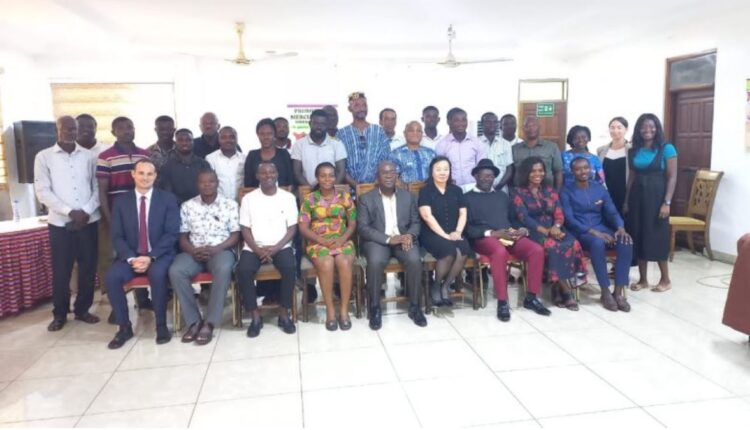 The equipment, worth US$ 60,000, includes gold Katcha, gold Konka, gold cube and gas-fueled smelter, which would be set up in Dakete, Obeng, Bazuri, Agya Pa Ye and Beaver Mines.

These companies would serve as demonstration sites for other Mines to learn from in the districts, municipalities and Regions.

Earlier, the beneficiaries prepared how they would go about their operations and a panel of judges, who accessed them, decided that the mercury-free processing equipment should be given to them.

He said the project was geared towards reducing the use of mercury in Ghana’s small-scale gold mining sector through education, the introduction of better technology, strengthening equipment supply chains and demonstrating business incentives for mercury-free gold production.

“According to the World Bank, it was seen as the most indispensable rural non-farm activity fundamental to achieving all 17 Sustainable Development Goals (SDGs),” he indicated.

Mr Opoku said, “In Ghana, the contribution of small-scale mining to total gold production increased from 2.2 per cent in 1989 to about a third in recent years. The sector also employs about one million people directly (51 per cent women) and supports about four million people indirectly.”

He said despite the massive benefits derived from small-scale gold mining, the sector was bedevilled with several challenges such as deforestation, land degradation, pollution of water bodies and release of mercury and other hazardous chemicals, such as cyanide.

Mr Opoku emphasised that the project was to support small-scale gold mining companies to test mercury-free processing systems to produce gold which could be marketed as mercury-free.

The project would also carry out community outreach and media campaign to educate smallscale gold mining communities on the dangers of mercury, responsible use of mercury and mercury-free technologies, and promote the procurement of mercury-free processing equipment by other Mines in the project Districts by facilitating engagements between them, financial institutions, and mercury-free equipment providers, he said.

Mr Opoku said, “In order to ensure that majority of miners transition from the use of mercury to mercury-free processing technologies, we would like to appeal to donor organisations to support research organisations, such as the University of Mines and Technology (UMaT) to develop mercury-free mining technologies that are affordable, portable, easy to use and with
relatively high ore recovery rates.”

This, he announced, would go a long way to ensure that Ghana met its goal of reducing mercury use in small-scale gold mining to 30 per cent by 2030, under the Minamata Convention on mercury.

Professor Richard Kwasi Amankwah, the Vice Chancellor of UMaT, stated that “I am impressed with small scale miners making such strong presentations and defending to convince judges that really they were doing mercury-free processing in their operations and deserve an award”.

He added that “Mercury-free processing was catching up, the Minamata convention was ongoing, and the key stakeholders were trying to gather the necessary data to see how far it has gone and the level of reduction. I am aware of many institutions that were also waiting in the field, and I want to encourage everybody to support all these ventures.”

Mr Wilson Zoogah, the Senior Principal Inspector of Mines, explained that licenses were sometimes delayed because those in charge would want to ensure that due process was followed.

“Mining is not just any simple activity, it is an activity that you need to look at it critically and examine all the pros and cons before you issue out a license”.

Mr Joseph Kofi Ababio, Chief Executive Officer of Agya Pa Ye Mines, on behalf of his colleagues, expressed appreciation to the organizers for providing them with the opportunity to interact with one another and see how best they could be promoters in the small-scale mining industry in Ghana.