Independent Member of Parliament (MP) for Fomena, Andrew Asiamah Amoah has in a letter addressed to the Speaker of Parliament, Alban Bagbin, declared his intention to join the ruling New Patriotic Party side, when the house resumes sitting on Friday.

His decision therefore increases the NPP’s seats in Ghana’s 8th Parliament to 138 against the NDC’s 137.

In the said letter cited by theghanareport.com, the MP said “I shall for the purposes of transacting business in the house associate with the NPP in the Eighth Parliament.”

He further assured the speaker that he will cooperate with the members of the ruling New Patriotic Party to ensure that government business is conducted efficiently. 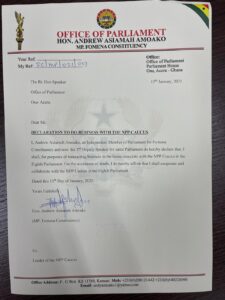 With uncertainty over whether the NPP would retain a majority in Parliament, many wondered if Andrews Asiamah would side with his old party to give them a slim majority over the opposition NDC in Ghana’s 8th Parliament.