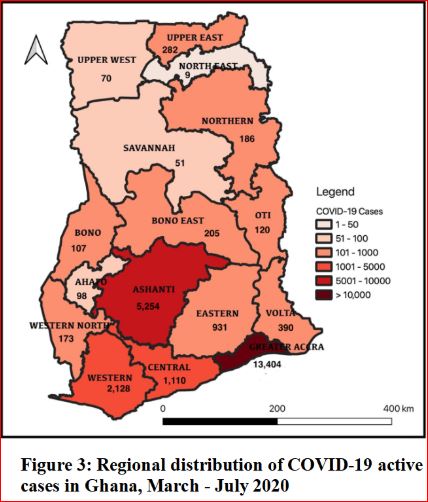 Out of the total, there were 4,192 active cases; 20,187 recoveries/discharges and 139 people who have died. Patients with severe symptoms are 25 and eight are in critical condition.

This implies that over the past four months, the country picked up 204 infections daily and 8.51 cases every hour as the pandemic hit hard.

In relation to recoveries/discharges, Ghana had 168 daily and 7 at every hour.

At the same time, the figure attributable to the easing of restrictions was nearly double the outlook a month ago, as community and workplace infections took a grip.

At three months, when schools were shut and public gatherings limited, five people were contracting the infection every hour.

Interestingly, the highest infections recorded in a day as published by the GHS website was Monday, July 6, where 992 were picked up. 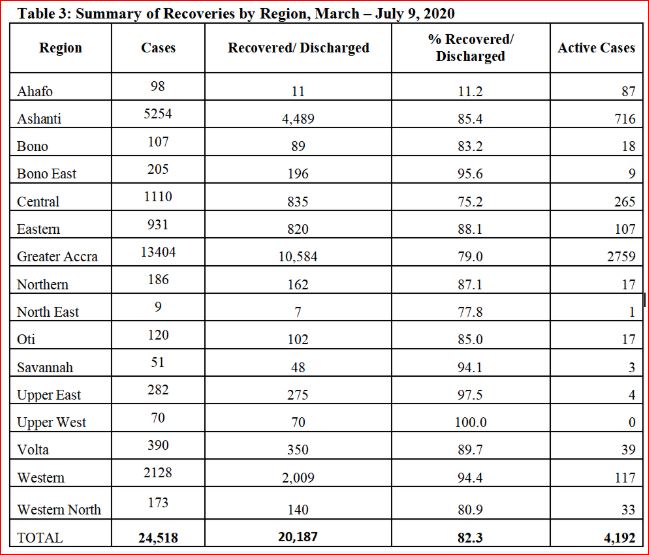 While the biggest recoveries/discharge was 5,526. This was announced on June 18 following the review of national guidelines on patient management.

Average infections for the first two months (March and April) were 92. At the same time, recoveries/discharges were 11.

Meanwhile, average infections over the last two months (June and July) were 316 as compared to 325 recoveries/discharges.

This is happening at a time when the Ghana Medical Association (GMA) and other health professionals have hinted a spike in cases.

They arrived on the conclusion based on recent political primaries, resumption of tertiary and second-cycle institutions, revision of public gatherings from 25 to 100 and the ongoing voter registration as well as the Ghana Card registration.

The Greater Accra Region leads the caseload with 54.7% followed by the Ashanti Region with 21.4% of the total cases.

The disease is prevalent in males who form 57% of people with the contagion, with females accounting for 43%.

The impact of SARS-CoV-2 has been devastating, with many important people succumbing to the infection.

They include Professor Jacob Plange-Rhule, a Consultant Physician and a former Rector of the Physicians and Surgeons College; the Medical Superintendent of the Kwadaso SDA Hospital, Dr Harry Owusu Boateng; Retired Orthopaedic Surgeon Dr Emmanuel Twagirayesu; Dr Richard Kisser, a Consultant Surgeon at the Trust Hospital in Accra.

Also, one laboratory technician and a community health nurse have also fallen to the disease.

The tentacles of the infection have stretched to all sectors with the governing New Patriotic Party (NPP) reeling the effects.

The body of the Chief Executive Officer of the Forestry Commission, Mr Kwadwo Owusu Afriyie, who was also a former General Secretary of the NPP, is on ice .

His colleague, Anthony Kobina Kurentsir Sam, who was the Chief Executive of the Sekondi /Takoradi Metropolitan Assembly, has since been buried.

Several other people who have been infected are on treatment, either at home or at various health facilities.

Some are at various stages of recovery, while others have been declared fully fit.

Meanwhile, the seat of government has announced that President Nana Akufo-Addo is in self-isolation for 14 days.

The release did not state whether Mr Akufo-Addo has contracted the virus.

A coalition of health unions in the country has also said that at least 779 members have tested positive for COVID-19.

Below are the Cumulative Cases per Region reported as at July 12:

(Case Count from Highest to Lowest)