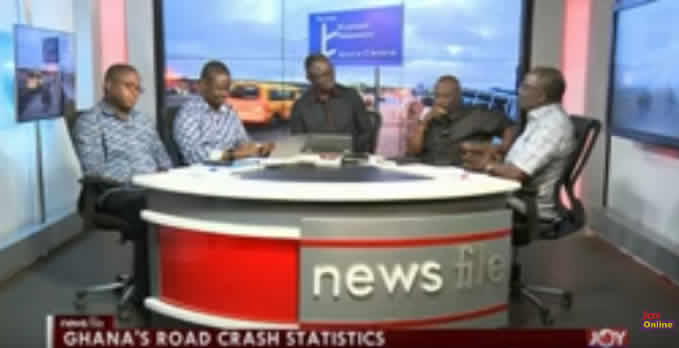 Four things we learned on Newsfile: ‘Time to bring in soldiers to check road carnage’ -Expert

With Ghana recording two confirmed cases of coronavirus outbreak, Newsfile Saturday on JoyNews dedicated its three-hour conversations to two topics–coronavirus outbreak in Ghana and one of the country’s deadliest cause of deaths–road accidents.

Coronavirus has killed no Ghanaian yet, but as a sign of its commitment, the government has announced $100m to combat the threat. What kills in Ghana, road accidents–recording over 600 fatalities in two months alone- is yet to get drastic government reaction.

Theghanareport.com monitored the discussions and brings you four things we learned.

This Saturday’s edition completely cut out the politicians. The producers had no problem empanelling health experts following the outbreak of Covid-19, and rightly so. Some sections of social media had expressed disgust at creeping attempts to turn the deadly outbreak to partisan point-scoring.

Perhaps taking this cue, the politicians became spectators today while experts took full charge of the panel. And post-production discussions show the health professionals were delighted to make an unlikely debut on Newsfile.

Ghanaian officials are expected to name a third victim of coronavirus, theghanareport.com has learned. The man- a Ghanaian- came into the country through Kotoka International Airport from a country yet to be named.

He flew directly to Obuasi in the Ashanti Region in a helicopter, JoyNews has reported. He was tested in a facility in the regional capital, Kumasi, where results turned ‘positive’. The man whose identity is unconfirmed becomes the second Ghanaian to be infected and the country’s third case. All cases were imported.

“That is exactly what is going on,” he expressed frustration after revealing that the Authority had achieved some 80% of its education and publicity campaigns with little to show for, in terms of declining road deaths.

Some 2,000 deaths are recorded on Ghana’s roads every year over the past decade while 50% of accidents are attributed to over-speeding.

“We have a whole strategy, we have action plans, and we have road strategy.”

“We have all the laws – speeding motorists, vehicles, driver training. What is requires now is to make an effort to enforce the laws,” Mr Adonteng said.

In the quagmire of a half-hearted, pussy-footing enforcement culture, transport consultant, Cecil Garbrah, made no bones about his belief that the fastest way out–bringing in Ghana’s no-nonsense professionals–soldiers.

“I am not saying the police are useless” he said, but after more than 20 years consulting on traffic and road sector, the fed-up expert wants soldiers to take over Ghana’s road regulation enforcement.

SPECIAL REPORT: The faces behind the fatality statistics in Dompoase road carnage

He said in times past; the soldiers were called in to join the police clamp down on armed robbery – and it worked. With more Ghanaians dying from sleepy, over-speeding drivers than wide awake, late night armed robbers, why not once again throw in the soldiers? He suggested.

“I have always been an advocate for that,” Cecil Garbrah said, and revealed it has compelled him to leave home as early as 6am because the Spintex Road in Accra spins with road discipline.

He would rather avoid terrible drivers by using it early, before the brigade of decidedly undisciplined road users take over.

But all this could change if the government deploys military officers on Ghana’s roads, he said. He referred to an experience on the Christ the King road in Accra where the presence of one soldier aided in the quickest rediscovery of commonsense by drivers on that road.

“I trust the military police” he placed a vote of confidence in the barracks.