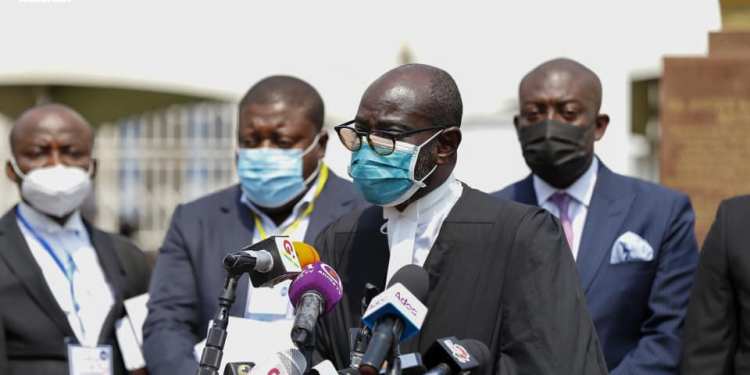 Frank Davies cautioned from speaking to the media after court proceedings

One of President Nana Akufo-Addo’s lawyers in the ongoing election petition hearing, Frank Davies has been cautioned from speaking to the media after court proceedings.

Mr Davies, who has been noted on several occasions addressing the media after every petition hearing, was cautioned on Monday.

It was the view of the Supreme Court that once the matter is before court, no lawyer is supposed to speak on the subject matter per the court rules.

It also advised that any lawyer who is not directly mentioned in the case must remove their robes and wigs before granting an interview.

Mr Davies, thanked the apex court for the observation and assured the court that he will advice himself accordingly.

It is unclear who would be granting the interviews on the ticket of the second respondent Nana Akufo-Addo going forward.

But in the case of the petitioner’s, Dr Dominic Ayine, who is not a direct party to the legal team has been the one addressing the press since the hearing started.

On January 26, Mr Davies admonished the legal team of the petitioner (Tsatsu Tsikata) to attach some level of seriousness to the case and stop wasting time.

The lawyers, he urged should respect the apex court and not engage in acts that will undermine the court.

“It is a place for real hard and serious legal work. It is not for flowery of literature, long prose, and rather dull English devoid of any legal merit,” he said.

On January 29, he, again said, it was imperative for the petitioner to present the evidence he claims was a basis for filing the 2020 election petition.

“It is very instructive to let all Ghanaians know that the one person who filed the petition, John Dramani Mahama has refused, failed or neglected to sign onto a witness statement.

“The witness himself has no witness statement before the court,” he said.

On January 30, after Mr Asiedu Nketia cross examination, he again had a few words to share.

Mr Davies said Asiedu Nketia was being cocky with his answers to the questions.

Frank Davies angrily expressed that if Asiedu Nketia does not consider himself as the spokesperson for the petitioner then why did he consent to be his witness.

“When Mr. Asiedu Nketia mounted the witness box in court today. He was largely evasive and for every question that was posed to him, his immediate response was that ‘I do not speak for the petitioner’. This is someone who in paragraph two of his own witness statement stated clearly that he was to lend aid to the petition filed by the petitioner.”

“So how can you come to court as a witness for a party and when you are asked questions in court, your response is that I don’t speak for the petitioner? Then why are you in the court? He thinks he can be evasive and elusive as he was in 2012 and 2013. This time around, he would not be lucky,” Mr. Davies said.