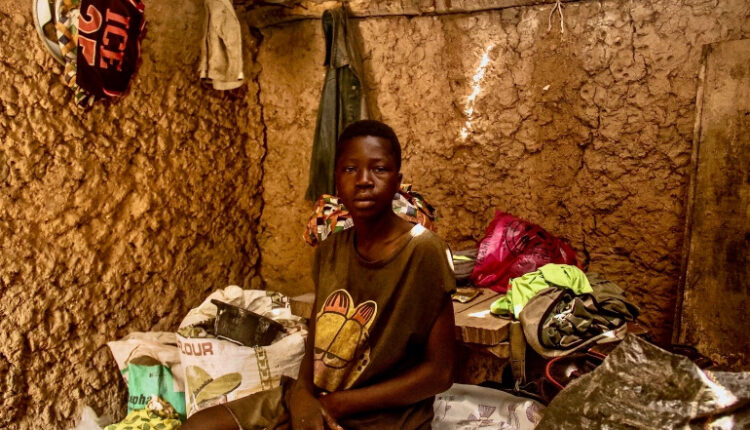 From Ghana to Nigeria: Little pieces of home

The young Ghanaian men and boys who come to this farm in Osun state, Nigeria, each year to find work mostly say they do it in order to improve their lives once they return home.

They have been brought in to the country in groups by a “master” – usually an older Ghanaian who has lived for several years in Nigeria. At the end of nearly a year of hard work hoeing ridges, weeding and planting in often difficult conditions, they will return to their homes with a motorbike as the prize for their labour.

Some motorbikes will be sold to help support families, others will be put to use – often as motorbike taxis to provide an income. Aside from this, farm workers do not earn any money – they are only provided with food and basic accommodation.

During these months away from home, many find some comfort in the personal possessions they brought with them. Through these precious items – an old wristwatch, a bag, clothes, a chain and pendant – they carry a part of their country, their memories of home and family, and their dreams for the future.

Lewin: The thing around your neck

Every morning before Lewin, 15, heads out to work on the farm, he carefully removes and stores two interwoven necklaces inside his travelling bag.

“The work is always too much. I don’t want to make the thing spoil quick,” he says. He is worried the necklaces will be damaged if he works while wearing them. Once he takes his bath after returning from the farm, he puts them back on.

The words – “The Methodist Church, Ghana” – are imprinted on the pendant of one of the necklaces.

“That is my church in Ghana,” he says. “This was my grandmother’s gift to me while growing up.”

Lewin says he remembers his late grandmother whenever he looks at it.

Yellow, 19, is always admiring his wristwatch even though he barely wears it. He frequently takes it out of his bag and stares at it. It is not the look of someone checking the time, but rather checking that it is still working. The wristwatch was a gift he bought for himself while in Ghana, a product of his hard-earned labour from the year before.

“Every time I get tired of being here, I look at it. It reminds me to continue to work hard. One day – one day – it will be better,” he reflects.

Yellow says that looking at the evidence of a time when he could afford the watch is a reminder of the possibility that he will one day have enough money to buy more things.

Richard: A bag of stories

This is 17-year-old Richard’s first time working in Nigeria. He is planning to sell the motorbike he will earn from the farm to pay for his education.

Bought a year before he came to Nigeria, his bag not only reminds him of his friends – who had bags in similar designs – but is also a sign of maturity and status.

“It is when you have ‘level’ that you carry this kind of bag,” Richard says smiling. He recalls days in Ghana when he would go out with friends, their backpacks strapped to their backs, even when empty. For them, these bags are a sign of belonging to a different “level”, of having “arrived”, he explains. Boys who did not have such a bag “quickly went to get theirs,” Richard laughs.

Peter: A jersey of two colours

Peter’s story of his shirt is a story of love, passion and team spirit. Just 15 years old, he says his love of football drove him to form a neighbourhood football team with his friends at home in Ghana.

They needed a uniform jersey, so they went to a market, going from stall to stall. After several hours, this striped lemon-green-and-black jersey was the closest they could find to what they were looking for – the closest to the kind of jerseys that they saw on football players on television. Whenever his friends arrived at his house wearing the jersey, it was football time.

“I just couldn’t leave it back at home,” says Peter. “It keeps me closer to my friends by just looking at it.” Whenever he wears it in Nigeria – which is only on special occasions such as the occasional day off – he remembers his friends and looks forward to seeing them again.

“I was gifted these by someone in my neighbourhood,” Koffi, who is just 13, reminisces. Much more than being just a gift, the shoes are special because, he says, “someone in the neighbourhood met my need”. They are a reminder that he is cared for.

“Each time I put them on, it fills me with a lot of hope that no matter how terrible a situation is, there would always be someone somewhere who truly cares.”

This is the first time that Koffi has come to Nigeria to work. He says he was excited about coming because he had never left Ghana before.

Stone: The cloth that binds

As the second of three children, Stone’s story of this particular shirt is one of pride. While their parents struggle to provide for them back home, Stone, 15, and his siblings are always excited when their parents are able to buy them clothes during the festive period at Christmas and New Year. That is the only time of year they receive new clothes. Last year, the siblings sewed new clothes from four yards of material that their parents managed to buy for them – including this shirt.

This is Stone’s first time away from his family, working in Nigeria, and he says that he misses them.

“This particularly means a lot to me because it is like a bond I share with my siblings and, more importantly, a reflection of my parents’ sacrifice.”

The night before embarking on his journey to Nigeria, Addo, 21, had initially planned to buy cigarettes with the money he had with him, but instead decided to keep the note.

He hopes to return home at the end of the year with both a motorbike, with which he hopes to start a motorbike taxi business in Ghana, and this banknote.

“I came to Nigeria with this money and I hope to go back with it. It will be good to start again from where I stopped. Whatever amount I earn upon return, it will be plus this amount I have kept.”