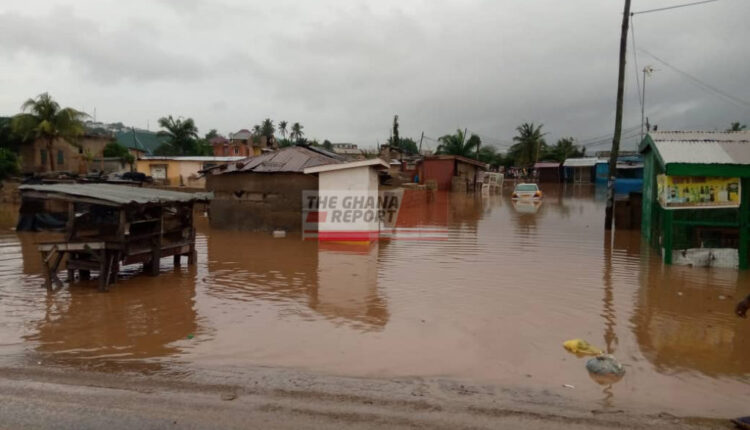 Residents in the Ga South District are calling on the government to come to their aid as the downpour on Monday dawn has either marooned them or displaced them from their abodes.

The torrential rains affected over five thousand people whilst one thousand residential and industrial compounds are submerged in water.

According to some residents, they had never experienced an incident on this scale at Ashalaja  which appear to be the worst-hit. Others who have lived in Ashalaja for over thirty years also claim  they used to experience such flooding but when former President John Kufuor constructed a wall to prevent River Densu from seeping out of the riverbed, the situation abated for sometime until the current disaster. This one appeared to overrun everything in sight. It is reported that, one Estate Developer came to the town to buy a land to start an Estate business and he broke the wall that was constructed during the Kufuor administration.

School children are unable to go to school as they do not have access to any of their school items at the moment. This is a sad news and problematic for Basic Education Certificate Examination(BECE) candidates who are preparing to start their final year examination on  October, 17th, 2022.

The flood extended to Obom, Manhean, Tetegu, and other smaller towns within the Ga South District in the Greater Accra Region.

Speaking to the media, some of the residents at Ashalaja claimed that they have lost everything. What they have used over fifty years, twenty years, ten years and other years to acquire have all been destroyed in just one day.  They indicated that farming is their only source of income and as they are unable to go to their farms, they are appealing to the government and benevolent groups to come to their aid.

The Ga South Municipal NADMO Director, Christian Afiadenyo together with some Executives of the National Disaster Management Organization have assured residents of affected areas especially those at Ashalaja, that the government is committed to finding a lasting solution to the recurrent problem.