The Ghana Boxing Authority & Imax Media Group on Saturday 15th January 2022, unveiled a new logo for the upcoming Ghana Professional Boxing League (GPBL), which is due to take off in the Accra Boxing Arena this February 2022.

The Ghana Professional Boxing League itself was launched on the 23rd December 2021 and will go down in the annals of Ghana Boxing history as one of the most significant showpieces in Ghana’s boxing calendar. During the launch, the Ghana Boxing Authority (GBA) and Imax Media Group signed a five-year boxing development partnership deal.

The vision and effort of the new GBA management team was given a huge boost by IMAX Media Group which took a big decision to support the development of boxing in Ghana by committing to invest a total of $1.7m U.S. Dollars into boxing development over a 5 year period. 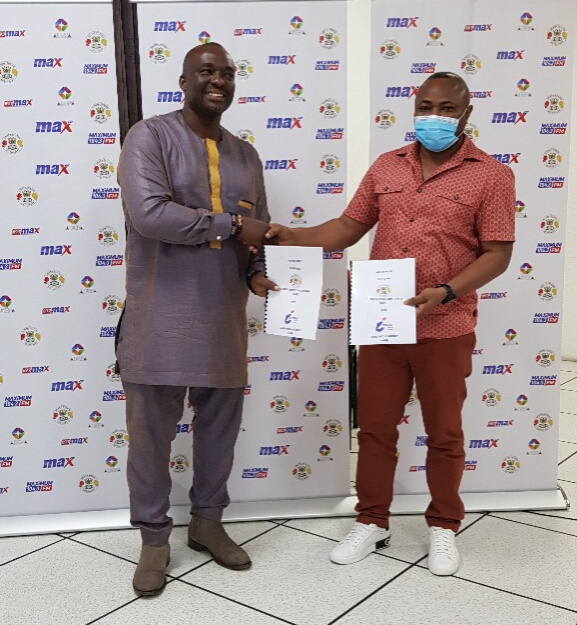 The newly unveiled logo of the Boxing League consists of a symbolic boxing ring, the GBA Logo and a text composition. The logo also reflects the symbolic “Red, Gold Green” of the national flag.

“We pride ourselves as being a key national sporting aspiration and wanted our new logo to reflect a strong national identity,” said Mr Abraham Kotei Neequaye, President of the Ghana Boxing Authority.

On his part, the CEO of Imax Media Group Mr. Maxwell Techie reiterated that it was indeed a great honour for his organisation to work with the entire boxing fraternity to rebrand and promote boxing sports to a new height.

Mr Tachie intoned that “our boxers have to re-dedicate themselves to their craft by working hard to win national and international belts” he further stated “it is the only way our boxers can showcase their very best to the whole world and follow the footsteps of Ghana boxing legends such as Azuma Nelson, DK Poison Ike “Bazooka” Quartey and the rest to justify all the investments being poured into the tournament”.

GBA President Mr Abraham Kotei Neequaye on his part thanked Imax Media CEO Mr. Maxwell Techie and his team for their profound commitment, further expressing his happiness with the ongoing preparations for the launch.

The first edition of the Ghana Professional Boxing League (GPBL) tournament is slated to take off this February 2022 and will climax with the final bout on the 26th December 2022. The league based tournament is designed to be a bi-weekly “Fights Night Live only on MAX TV”, free to air nationwide.