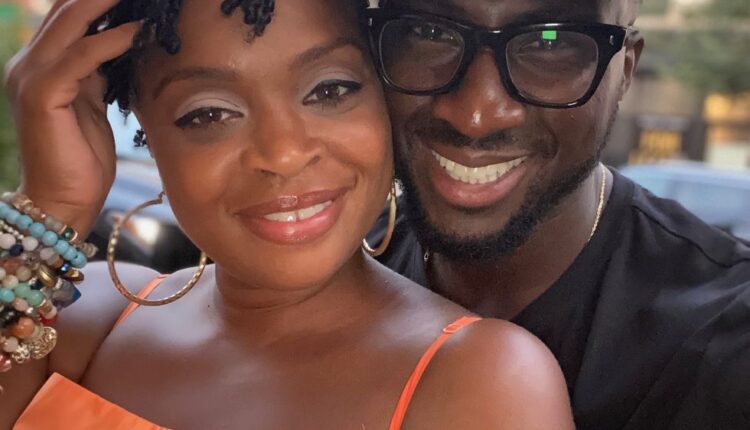 Getting Covid Gave Us a New Outlook on Marriage

In March of 2020, Dawn and Dayo Olatokun were five years into their marriage and only communicated about their three children or bills to be paid. The New York City couple felt more like business partners than lovers.

A few months prior, Dawn, 40, had left her job to build a nonprofit, and the family had planned to rely on 32-year-old Dayo’s income as an event emcee and Uber driver in the meantime. Then the pandemic hit. Dayo’s events were all cancelled, and he no longer felt safe driving for Uber because of the contagion risk. On top of that financial stress, they also needed to help their three kids manage school from home.

With their marriage at a breaking point, they decided to pursue couple’s therapy. However, in November—on the same day of their first joint therapy appointment after the intake session—Dawn tested positive for Covid-19. She was hospitalized, and her condition ping-ponged between extremes. The couple was unsure if the forever they had taken for granted was about to be gone.

When Dawn was finally released after the near-death experience, they looked back and realized her illness was a powerful catalyst to a happier, more loving marriage. Today, spouses Dawn and Dayo have a new appreciation for each other and openly express their love. Read on to hear how Dawn and Dayo navigated such a challenging time and came out of it with the silver lining of a stronger relationship.

You started dating in 2012 and got married in 2015. What was your relationship like before the pandemic?

DAYO: Communication was minimal, and when we did communicate, it was mainly about the same things: The kids, the bills, responsibilities. We were tired all the time from work.

How did the pandemic affect your job situation?

DAYO: In December of 2019, she left her job to pursue her nonprofit, and the plan was to build the nonprofit while I was working. We lost half of our income, but I was making that up as an event emcee. I was starting to get more work, which would have compensated for the income we were losing on her end. And then all of my dates got postponed. My calendar was filled up from February until December, and of course, February came, and then came the pandemic, and we were in the space of “What do we do now?”

And how did those first few months of the pandemic affect your relationship?

DAYO: The uncertainty of the bills and the kid’s school obligations at home was hectic, and we didn’t communicate much.

DAWN: When we did, it was more so the laundry list of things that had to be done. Like, “You can take care of this, and I will do that.” By the end of the night, we were drained and tired, and it was time for bed. There was no pillow talk. There was no intimacy.

DAYO: It felt like we were business partners rather than a married couple. That’s the best way I could put it.

Did you make any attempts to repair your relationship, and how successful were they?

DAYO: When the schools opened back up in September, we were able to have some relief. But by this time we had been so wired for survival during the pandemic, we didn’t even realize how distant we were.

DAWN: I would say that things started to get better once I started to go to therapy. I was going to sort out some things that I had experienced in my past. Going to therapy, I was able to unpack some things, and my viewpoint of marriage and of him and being a wife changed. I was more verbal, verbal meaning vulnerable.

In November 2020, Dawn tested positive for Covid. Can you take us through what happened?

DAYO: On Sunday, November 8th, Dawn was so weak she couldn’t get up to get dressed for church. Monday evening, she was in the shower and said she couldn’t smell her body wash. When she went to the kitchen to grab something to eat, she wasn’t able to taste her food. Her symptoms at this time were only body aches and coughing. She asked me to take her to the emergency room, where she was treated for her symptoms and tested for Covid. The results came back the following morning, and it was positive.

DAWN: It wasn’t until November 10th, that night, when my body really started to shut down. I was laying in bed and I had a fever, and I would fall asleep and I would wake up and my clothes are so wet that I can wring them out. The next day I went to a quarantine hotel. There was a day that I didn’t eat at all because my body was rejecting everything. I had to force myself to take showers, and I took the fastest showers I could because I was like, keeled over in pain. A few days later my stomach felt really sour, and I’m like, ‘I haven’t been eating, so what’s happening?’ Then maybe 20 minutes after that, I got really scared, my vision was very distorted. My body didn’t feel right. So I called and told them that I needed an ambulance.

After leaving for a quarantine hotel, Dawn was hospitalized. What was that experience like for both of you?

DAYO: This was the first time I had thoughts of what if I lose my wife. In my head, I was seeing a funeral and imagining my kids crying at the funeral. I’m like, this can’t be. I started praying, like God, you can’t let this happen. I can’t picture life without my wife. I need her. My kids need her. I was so depressed. I was overwhelmed with emotions. That was the first time I legit thought my wife could possibly die.

DAWN: Once the fever came back strong, I started to think about if I were to pass away, who would take care of my girls and make sure that their hair was done, that they had a dress for prom, that they are in the best of schools because they’re so intelligent and just thinking about my son. How would he be affected if I passed away? These were my thoughts, but I didn’t want to put all of this on Dayo. But that Wednesday I spoke to him, and I was so afraid. Once the fever came back, I was literally planning my last days in my mind.

How did your relationship change after such a challenging experience?

DAYO: It made me much more vulnerable with her. When we spoke again for the first time, and she said things were getting better, something felt different. Every time I was on the phone with her, I didn’t want to get off the phone. I tried to FaceTime as much as possible so that I could see her. When she finally came back home, I was like a baby. I was holding her all the time. I was kissing her all the time. She looked at me one day and was like, where is all this affection coming from? I was like, woman, you have no idea, I thought I was going to lose you. Since then, we’ve been much better. Much closer. We talk a lot more. We communicate a lot more. We have pillow talk. We’re much more intimate. So that was a turning point.

DAWN: Something that I jokingly said to him was, so I have to go through that to get some attention? But, really, he shared his heart. Rather than me having an attitude or lashing out, the way I respond now is different. I’m a little softer. I am more gentle, compassionate about what he may be going through at the time, and more available emotionally and supportive. I am grateful for life and being able to do life with him. I am maximizing every moment.

How do you maintain your renewed connection?

DAYO: We have not been to an appointment for couples therapy post-Covid due to both of us gearing up for major projects: my book release and Dawn’s workshops for women. However, we’ll be back on top of it once the book signing has concluded. Because our communication has improved tremendously, we intentionally set a “pillow talk” time for 9 p.m. once the kids are in the bed. We’ve set that time apart to discuss any pressing issues within our marriage, children, businesses, and overall household. We’ve also intentionally set aside date nights throughout the month which gives us space to just focus on each other outside of our obligations.

What would you say to other couples in quarantine?

DAWN: Take this time of quarantine to get to know each other all over again. I know that it’s rough, and some people have kids and bills. But just be grateful for what they do have because so many have lost so much during this time.

6 Career Paths For The Creative Soul

6 Relationship Arguments Way Too Petty To Ever Fight Over

Best Strategies for Applying to College on Time

No One Treated Me Like An Adult Until I Got Engaged