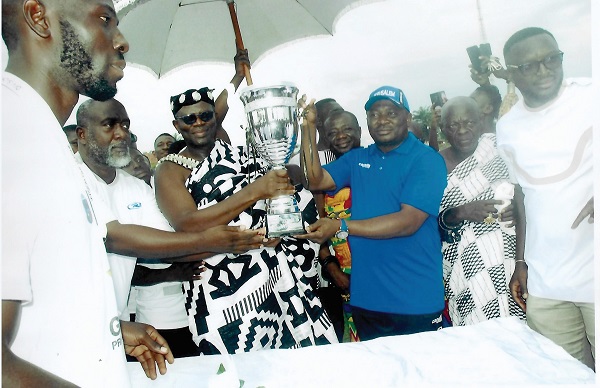 The Ghana Football Association (GFA) last Sunday officially crowned Kotoku Royals Football Club as the Division One League (DOL) Zone Three champions amid pomp and circumstance after a coronation match with Susubiribi at the Oda Stadium.

The thrilling match which was watched by a capacity crowd ended in a pulsating 2-2 draw.

A member of the DOL Board, Mr Gideon Fosu, was assisted by the Member of Parliament (MP) for Oda, Mr Alexander Akwasi Acquah, the District Chief Executive (DCE) for Birim North, Mr Raymond Damptey, the Omanhene of Akyem Kotoku Traditional Area, Oseadeeyo Dr Frimpong Manso IV, and Accra-based businessman, Mr Emmanuel Nyarko, aka Kofata, to present a trophy, medals and other awards to Kotoku Royals players and officials.

After the presentation ceremony, the stadium went agog as players, officials and fans of Kotoku Royals went round the field jubilating with the trophy, amid singing and dancing with the Royals’ “jama” group providing music to crown the event.

In separate interviews with the Daily Graphic, the MP, the DCE, Kotoku Omanhene and the president of Kotoku Royals, Mr Linsford Boadu- Asamoah, were elated by the historic feat, promising to work tirelessly to help the club to make an impact in the Ghana Premier League (GPL).

They promised to invest financially in the club by recruiting quality players to beef up the current crop and also develop the Oda Sports Stadium to meet the GFA standard.

Oseedeyo Frimpong Manso advised owners of hospitality services such as hotels, restaurants and eateries to improve their facilities to attract visitors to Oda to watch the home matches of Kotoku Royals.

The MP said he and other stakeholders would help upgrade the Oda Stadium and also help in the player recruitment exercise since the club’s promotion to the GPL would promote peace and unity in the Kotoku Traditional Area, as well as boost the local economy.

Mr Nyarko also emphasised that they would do everything possible for the club to rub shoulders with glamorous teams such as Asante Kotoko and Hearts of Oak and stay in the GPL for more than 40 years.

Mr Boadu-Asamoah, for his part, was happy about the numerous assurances he had received from stakeholders from Akyem Kotoku to help financially to make the club a formidable one.