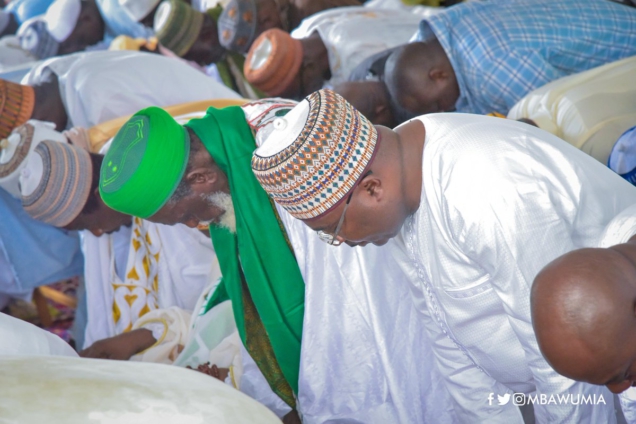 Vice President Mahamudu Bawumia, on the occasion of Eid-ul Fitr celebration, has acknowledged the admirable mutual respect, religious tolerance and harmony existing between Muslims and Christians across the country.

He said such religious tolerance and harmony had placed Ghana on an enviable position on the Global Peace Index, which ranked her first in West Africa and second in Africa as the most peaceful country.

“Elsewhere, faith-based groups are at each other’s throats and being destructive element to the peace of their communities.

“Here in Ghana, we’re blessed with tolerance and progressive religious leadership and groups which are contributing meaningful to the national development. “Let’s continue to strengthen our ties regardless of our different religious identity so that we can continue to positively influence our communities and the nation,’ Dr Bawumia said this at the

Eid Prayers held at the Black Star Square in Accra, to climax the month-long Ramadan fast.

The Eid prayers was held collectively in large numbers for the first time in two years following the imposition of COVID-19 restrictions by the government.

The celebrants adorned in their white outfits prayed to Allah for his grace and mercies throughout the period of Holy Ramadan and ensuring a successful fast.

The Vice President acknowledged the contributions of religious organisations, especially Christian and Muslim groups towards the country’s development efforts in areas of education and health infrastructure.

He urged them to venture into other areas such as agriculture and small-scale production to help create jobs for the teeming youth and ensure sustainable development.

Dr Bawumia enumerated various government policies and interventions to alleviate the plight of Ghanaians, especially during the heat of the COVID-19 pandemic.

He mentioned the free distribution of water and electricity as well as food to the less privileged people in the society.
“Government feels the plight of the people and has not turned its back on them in times of crisis.

“We showed it during the banking crisis and paid about 25 billion Ghana cedis to save 4.5 million funds of Depositors.

“We also showed it during the COVID-19 pandemic through free distribution of water, electricity and supported businesses, households, traders and entrepreneurs,” the Vice-President pointed out.

The government, he said, was undertaking various development programmes in the areas of education such as school blocks, dormitories, ICT centres, strengthening the Free Senior High School Policy, paid examination fees of BECE and WASSCE candidates, Planting for Food and Jobs and other infrastructure like roads, bridges, drainage systems and interchanges, Dr Bawumia added.

He said the Government’s commitment to the health needs of the people had been upheld through the payment of the National Health Insurance Scheme (NHIS) claims, recruitment of thousands of health workers and the implementation of ‘Agenda 111’ initiative.

On support to Muslim Communities, the Vice-President indicated that about 200 infrastructure projects had been completed including roads, Astro-turf, bridges, school blocks and drainage systems while 40 Zongo students had received scholarships to study medicine in Cuba.

On his part, the National Chief Imam, Sheikh Dr Osman Nuhu Sharubutu, in a message read on his behalf by Sheikh Aremeyaw Shaib, his Spokesperson, commended Muslims for a successful Ramadan and urged them to continue exhibiting the Islamic virtues of sympathy, compassion, tolerance, care, forgiveness, love and be each others keeper.

The Chief Imam thanked government for allowing both Muslims and Christians to hold prayer sessions at the Jubilee House, the seat of government, during the Ramadan period.

He believed that the mutual respect and religious tolerance between Muslims and Christians had strengthened religious harmony and peace in the country and urged them to continue the peaceful co-existence.

He lauded government’s social interventions and development programmes, especially in Zongo and inner cities such as roads, school blocks, ICT centres, recruitment of Arabic teachers to teach in Islamic schools and plans to construct model Zongo senior high schools across the country.