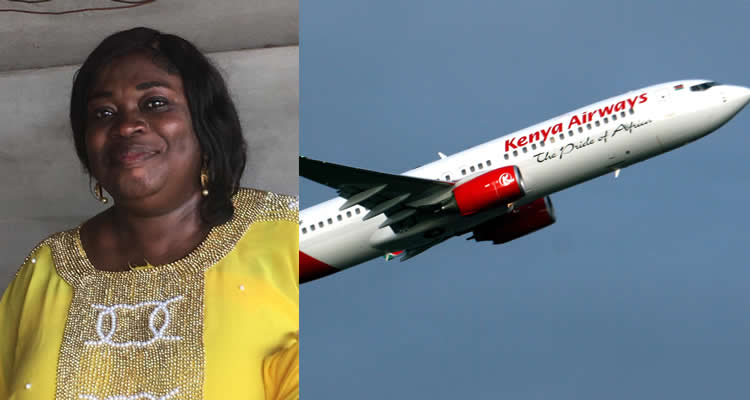 It is to defray a judgment debt she obtained in March 2011, against three defendants namely “Kotoka International Airport,” Kenya Airways and KLM Royal Dutch Airlines.

In 2009, Mrs Betty Kyeisued the defendants after she suffered injuries on board a Kenya Airways flight from Accra to Nairobi en route to Mumbai, India.

The court documents show, “while airborne, she was returning to her seat from the washroom when, suddenly, the aircraft was handled in a manner that violently threw her to the floor without any or any notice.”

“She passed out instantly only to regain consciousness at the rear end of the aircraft with the cabin crew surrounding her and blood oozing freely from her forehead.”

Mrs Kyei was sent to Kenya Airways clinic where she was given a prescription to look for and buy the necessary drugs out there in Kenya where she was a stranger.

After she managed to arrive in India, she said she was unable to do business and remained in “so much pain and discomfiture.”

Kenya Airways asked her to foot the bills and later make a claim.

“She reported to the Accident and Emergency Unit of the Komfo Anokye Teaching Hospital, in Kumasi, with severe headache, dizziness and a deep cut on the forehead where she has been receiving treatment ever since.”

“The doctors, subsequently, issued her with a Medical Report indicating she may need a CT scan if the headache continued to be persistent and she would be off work for six months. Since then, she has been at home without working.”

Her counsel says their client has suffered personal, financial and economic pressure from the ‘gross human rights abuse’ and sued for breach of contract.

Kenya Airways has denied the sudden and violent movement of the aircraft caused her injuries.

The defendants contended that Mrs Betty Kyei was already hypertensive which contributed to her fall and consequent injury.

The airline denied Kenya Airways clinic wrote a prescription drug for her to go buy in Nairobi. Counsel for Kenya Airways also denied they abandoned the plaintiff.

“Furthermore, the defendants deny that the plaintiff reported to the 1st defendant’s officers in Accra. upon her return and the latter asked her to find money to go to the hospital and submit her bills later for settlement”

The trial judge, Justice Utter Dery, ruled the terms and conditions of the contract between Kenya Airways and its passengers indicate that there is a duty of care.

That contract branded Exhibit A in court reads in part that “the passenger has the right to address a complaint or to make a claim for damages against either.”

The judge also referred to the Warsaw and Montreal Conventions which mandate air carriers to make advance payments to a passenger billed or injured.

The judge awarded $155,000 in compensation for injuries.  Since the judgment was issued, the defendants have failed to compensate the victim.

Counsel for the victim obtained authorisation from the High Court to seize any Kenya Airways aircraft, KLM Royal Dutch Airlines aircraft, office computers, tables and chairs, and any stationery.

The order obtained on January 24, 2020, also included the seizure of vehicles belonging to the two airlines.

The defendants have, however, filed an appeal at the  High Court in April 2011 which was thrown out.

They proceeded to the Court of Appeal in May 2011 and cited errors in the judgment delivered by Justice Uuter Paul Dery.

They also obtained an order for stay of execution in 2011. Counsel for the defendants has however failed to pursue the appeal.

Fresh legal representation for the Kyei family, Amoako Frimpong, is pushing for the appeal to be heard.

NO PART OF THIS PUBLICATION MAY BE REPRODUCED WITHOUT THE PERMISSION OF THE EDITOR, EDWIN APPIAH. HE MAY BE REACHED ON 0266731420.

THEGHANAREPORT RESERVES THE RIGHT TO EXERCISE ITS OPTIONS.