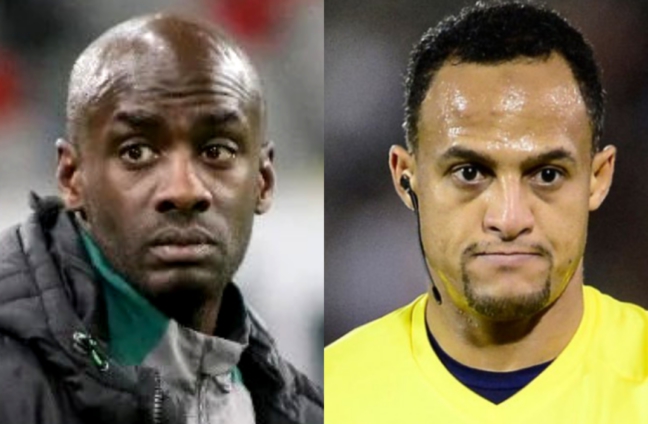 Ghana’s loss to Portugal; a mixture of Otto Addo’s sins and a referee’s unrighteousness

Yesterday, the senior national team, the Black Stars of Ghana, tasted their first defeat in the 2022 FIFA World Cup in Qatar.

At the end of ninety minutes, the Black Stars had failed to secure the needed three points; bringing them to the bottom of Group H.

Following the sour turn of events, scores of supporters took to social media to vent their spleen, and express their resentments about Ghana’s defeat to Portugal.

In a series of tweets and social media posts, the visibly disappointed football fans shared their opinions about the game and the factors which they believe culminated in the team’s defeat.

While some dwelled on poor officiating, others turned the heat on coach Otto Addo; blaming his poor tactics for Ghana’s narrow defeat to the Portuguese nationals.

Looking at the bulk of concerns that were ‘vomited’ across social media, and per my own observations, I’m also inclined to agree that indeed, two names can be used to sufficiently explain our loss.

The first being coach Otto Addo, and the second- referee Ismail Elfath.

In the ensuing paragraphs, I shall proceed to explain how the actions of these two gentlemen jointly made Ghanaians retire to bed in grief; starting with coach Otto Addo’s iniquities.

As an individual who is very passionate about leadership, I have always maintained that everything rises and falls on leadership.

The quality of leadership in any human institution, is directly responsible for the outcome of events; whether good or bad.

In the instance of the Black Stars or any other football team, the leadership always rests on the shoulders of the coach.

This is because, the coach is the one who is believed to have the final say in all matters relating to the team’s wiring and configuration.

Indeed, he is the one who decides which player should play a particular game, and which one should warm the bench.

Also, it is the coach’s responsibility to formulate the tactics and dictate the style of play.

These two central responsibilities make him a key ingredient to a team’s success, and once he fails in these aspects, disaster will not be far from his abode.

Unfortunately, coach Otto Addo did not do well in executing these two crucial responsibilities. I’ll start with his line up and tactics for the game.

Traditionally or at least since I became an ardent follower of the round leather game, I rarely see the Black Stars playing a lone striker before.

It is very rare for the team to deploy that tactic. Indeed, the only time I recall seeing that was during the 2010 AFCON in Angola, where Asamoah Gyan played as a loner.

Apart from that, I don’t immediately recall the number of times I’ve seen the team use that approach.

It was therefore a huge surprise when I saw Otto Addo’s decision to play only Inaki Williams upfront.

Now for the avoidance of doubt, it must be noted that for a team to be able to successfully play a one top striker, then two conditions must be present.

First, the one being deployed as the lone ranger, must be a typical arrowhead striker himself, who has a natural flair for goals and who can move into spaces and create his own spaces.

The second condition is that, the rest of the players behind him must either be strikers themselves or persons with proven striking abilities and instincts.

But in the case of Ghana, Inaki Williams is not an arrowhead striker, neither was he supported by a lethal striking lineup.

At Athletico Bilbao where he plies his trade, he is often supported by other colleagues. The coach, Ernesto Valverde, does not deploy him as an arrowhead.

It was therefore a huge surprise when coach Otto Addo decided to run that rather needless experiment. In the end, we paid for it dearly!

From the proceedings, Inaki Williams did not make any surging runs forward, neither did he make any significant incursions at goal. Of a reality, he was a pale shadow of his good self.

The only clear chance that fell to him was in the dying embers of the game when he managed to go behind the Portuguese goalkeeper and steal the ball. But even with that, he slipped!

Coach Otto Addo, must therefore revise his notes and dare not deploy Inaki in the manner he did again! There is no doubt about the quality of Inaki, and the wits under his sleeves.

But if you put a square peg in a round hole, what can you expect? The team is roundly deficient on terms of its striking department. However, a one top striker is not the way to go.

Moving forward, Otto must revise his notes on this. A combination of Inaki, Jordan Ayew and Afriyie Barnieh, doesn’t look a bad idea to me. But whatever the case, we can’t excel with a lone striker.

I’ll now turn my attention to another lapse by Otto Addo, which severely affected the team; the timing of his substitutions in the game.

Eight minutes after Ronaldo broke the deadlock through a controversial penalty, his colleague skipper, André Dede Ayew, also found the back of the net in the 73rd minute.

Dede’s equaliser was engineered by Ajax midfielder, Mohammed Kudus, who laid a pass to Andre, for him to finish a simple tap in.

Unfortunately, just after the move by the two gentlemen, coach Otto Addo, immediately ordered the substitution of both Andre and Kudus.

It was a decision that got many fans, including myself completely bewildered. This is because, Kudus was the only man who despite having received a yellow card, was making some meaningful efforts at goal.

Indeed, it was one of such efforts that culminated in Ghana’s equaliser. Taking your most potent attacker off, after he had actually engineered a goal was just a bad decision, and that certainly dealt us a blow.

Another reason why those two immediate substitutions remain heavily criticised was the fact that, they seemed to have disoriented the style and composure of the team.

One thing about substitutions is that, once they’re effected, the rest of the team have to align with the new tactics and conform to the latest order which the substitution dictates.

With Andre and Kudus simultaneously off, it was going to take the team some time to adjust their strategy to accommodate the two new players who had come on board.

Unfortunately, it was during this period of adjustment that the Portuguese grabbed their second goal, only five minutes after the substitutions had been effected.

This too, was another coaching blunder, which Otto shouldn’t have gotten wrong! The two players, after partnering to score logically had their confidence fired up, with an increased motivation to do more.

So why take them off immediately, in a way that significantly disoriented the team as well? I’m convinced without any shred of doubt, if Otto had not made those two substitutions in the manner he did, Ghana would not have conceded a second goal.

I dare say that, the energy from the equaliser would have even propelled the team to possibly grab a second, and be miles ahead of Portugal. Otto’s timing eroded this possibility, and that is why he must be mindful of his changes in his next two games in Qatar.

Another substitution which also didn’t quite sit well with me, and other lovers of the game was the substitution of the number 26 shirted man, Alidu Seidu.

As far as I’m concerned, he was the most instrumental in our defense and his efforts were visible. Despite having been booked by the referee, the chap was still our best man at the back.

Otto’s decision to give him a shower was therefore very questionable.

Now finally, concerning Otto Addo and his lapses on the day, there is also an issue about his decision to play Baba Rahman.

According to some critics, Baba Rahman, apart from his sluggish and poor concentration, is also an invention of the FA President, hence Otto Addo’s inability to do away with him.

Well on that particular score, I beg to differ slightly. Yes, he can be a liability in some cases, yet despite all his faults, he offered the team some good attacking vibes. Indeed, he was the brain behind our second goal.

What Baba has always lacked is the ability to concentrate and keep his eye on the ball. If he solves that problem, he is a chap no one can dismiss. That refining, is an issue Otto must add to his notes.

On the issue of poor officiating, being one of the reasons for our loss, there’s really very little for me to comment on.

This is not to say that the referee did not make some questionable calls. Indeed, he made some decisions, which if reviewed may not stand the test of time and fairness.

However, I do not think that his lapses in judgment did us the greatest harm, as compared to the issues on our technical bench, led by coach Otto Addo.

Nonetheless in the 65th minute, the referee, Ismail Elfath, awarded a penalty to Portugal, after Ronaldo was apparently fouled by Mohammed Salisu.

I have taken a careful look at that incident, and while it appears that the player truly made contact with Ronaldo, it didn’t look like a typical foul, which merited penalty.

Under the circumstances, it would have therefore been fair for Elfath to have consulted the Video Assistant Referee (VAR) to fully ascertain the gravity and intentionality of the foul.

But despite the protests and the insistence for him to do so, he stuck to his earlier decision. This in my opinion, was a show of needless intransigence which does not augur well for the beauty of the game.

In association football, there are fouls which are indisputable. But where doubts arise, there’s the need for such doubts to be cleared and that’s why the VAR was introduced.

Refusing calls to consult that medium is therefore untenable. Who knows? Perhaps if he had consulted the VAR, the penalty would have stood, and the agitations from both players and fans would not have arisen.

Under the circumstances, I therefore agree with calls for FIFA to engage the referee and talk him into exhibiting the needed fairness on the pitch.

As for the offside claims regarding the third goal, they don’t seem tenable for me. Those who understand the nuances of offside better have explained that, no offside was committed.

After my own viewing, I also agree with them, hence the third goal does not pass as a controversial subject for me.

An animation from the VAR further cements my impression that at the time Bruno Fernande’s released the pass to AC Milan’s Rafael Alexandre da Conceição Leão, he was onside, hence giving the goal its legitimacy.

In all the overall circumstances, the referee’s faults constituted, in my opinion, 20% of our loss, with Otto Addo’s decisions, taking the 80%.

Moving forward, I expect the team to learn from their mistakes and rise to the occasion.

In the meantime, let’s remember that in 2006, the Black Stars lost their opening World Cup game against Italy by two goals to nil.

Later, they beat Czech Republic, who were then ranked second in the world; and went ahead to qualify from the group stages after defeating the US.

So I guess this is not time for us to despair. I strongly believe we can replicate same in Qatar! And so for me, let’s keep hopes alive. Game on!

The author of this piece is a writer, a broadcast journalist and corporate MC, currently with The Multimedia Group. He’s also a sports commentator, with a lot of interest in football.