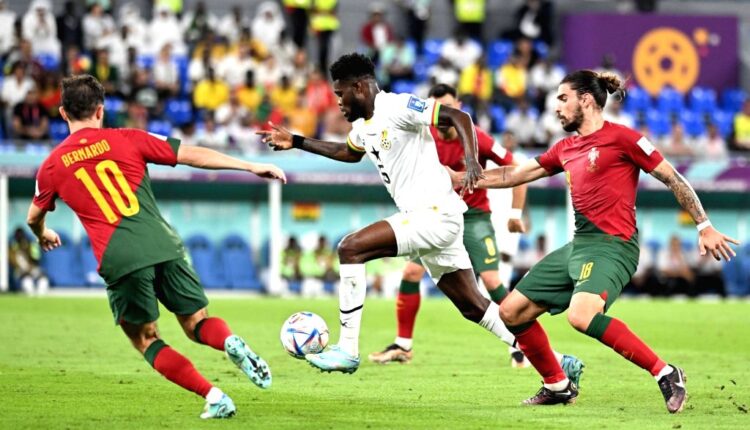 Ghana contested Portugal to a great match at the world cup in Qatar,  but in the end, Portugal with one of the most established footballers soared higher in the exact image of the livewire’s characteristic goal celebration.

The mercurial Christiano Ronaldo was the cynosure of the epic match but the fluent play of collective Portugal was also a delight to watch as Ghana was unsettled for an extensive period before the goals emerged. What a way to bring the stadium alive,  most especially the man involved in their creation.

Ronaldo’s thirst for goals was crystally clear from his darting runs and a 10th-minute goal that was overruled. That was a momentary alert on coming events casting shadows. Ghana appeared to have slumbered a bit on the duty of policing the dangerous spot where the football assassin is capable of anything even in the most marginal of circumstances.  It was a second-half action where the outstanding mobility of Portugal’s attack located Ronaldo. He moved menacingly, to be met with a tackle by Mohammed Salisu. Ronaldo fell in the 18-yard box and the referee’s decision would turn the scales. Ronaldo pounced on the opportunity of penalty granted by the referee like a hungry lion, kicking the ball with power and direction. Ghana’s goalie, Ati Zigi got the direction right but on the lower wavelength of the ball’s flight.

That moment stirred emotions and left controversy in its trail because the decision relished by the Portuguese was to the chagrin of the fans on the other side. Ronaldo celebrated his 65th-minute goal in his trademark style and was mobbed by colleagues on the touchline. He becomes the record-first player to score in five successive world cups. It was against the run of play that Ghana found the equalizer eight minutes later from a freak but one of its rare attacks, having soaked pressure all day. The football game respects tradition but also makes room for surprises. On this occasion, the star players on the Ghana side lived up to their billing, enforcing a productive counterattack when Mohammed Kudus wriggled his way to the left, deep inside the half of Portugal, and managed to squeeze in an inviting shot.

The ever-trusted captain of Ghana who had scored against Portugal in their last world cup encounter in Brazil in 2014, graciously met the low cross with the unusual right foot and got the ball into the net.  This was like a dream to Ghanaians for it was a goal that resulted from much strain as Andre Ayew was the only white-shirted player among the green and reds who poured out to deal with the danger. Ghana did not really relapse on the famous equalizer which happened to be Africa’s maiden goal at the end of the first round of matches in Qatar but it was Portugal that fired up and moved upfield with gusto in search of another lead.

Yet, again, this match proved the higher standards and stakes in the world cup where you are punished in just one moment of hesitation or indecision. This indeed was the case when Baba Rahman failed to intercept before the ball could touch the foot of the on-rushing Joao Felix. Once the Ghanaian defender failed to estimate the hidden and present danger that was coming and the quick thinking of frustrating it, the chance was presented to Portugal to pull the stiletto to draw second blood. 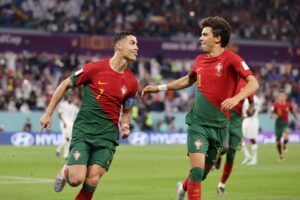 Rafael Leao also exploited the other flank of Ghana’s defense with a diagonal to beat Ati Zigi in the Ghana post. Leao could be spotted smiling when he pulled that trigger on Ghana as he watched the ball dispatched on his right foot in motion to the glorious destination.  The 78th and 80th-minute goals by Portugal would be cursed by Ghana as they potentially smashed their hubris against the well-drilled Europeans. Portugal was not too invincible after all.

An image redemption foray by the overlapping Baba Rahman on the left saw the defender controlling well before flicking a highball across, to be skilfully headed to the back of the net by substitute Osman Bukari. A shaky Portugal then employed delay tactics and theatrics on the field after the 89th minute but tried as Ghana did, the much-needed third equalizer remained elusive.

Not even the last-minute pandemonium that descended on the Portuguese inside their box which was caused by the stealthy Inaki Williams could give the swelter in the day, that dramatic finish it could have been.