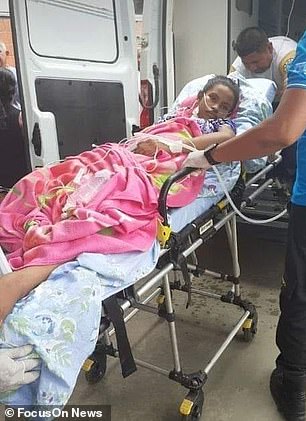 Girl, 13, dies giving birth to her father’s child after suffering four years of sexual abuse – but the baby survives

A thirteen-year-old girl who was sexually abused by her father for four years died while giving birth to his child, police in Brazil have said.

Schoolgirl, Luana Ketlen, died on December 11 after she was admitted to hospital suffering severe abdominal pains before medics discovered she was pregnant.

Doctors decided to induce labour and delivered a baby boy – who has survived – before rushing the girl to a specialist care unit. She died en route.

Police subsequently issued a warrant for her 36-year-old father, Tome Faba, saying they believe he began abusing his daughter when she was aged just nine.

Faba went on the run before being caught in the city of Coari a week later.

He appeared in court for the first time on December 27 charged with child abuse and manslaughter.

Faba’s family, who live on the outskirts of Coari, say they had no idea about the abuse.

The slightly-built teen was seven months pregnant when she was rushed to Coari regional hospital suffering from severe pains.

Doctors diagnosed her with acute anaemia and decided to induce labour.

She gave birth to a premature baby boy who miraculously survived.

But following delivery, the girl’s health took a turn for the worse and test results found she was suffering from multiple complications including cirrhosis of the liver, water on the lungs and low blood pressure.

Luana died while being airlifted to a specialist hospital in Manaus, the Amazonas state capital, some 225 miles away (363km). 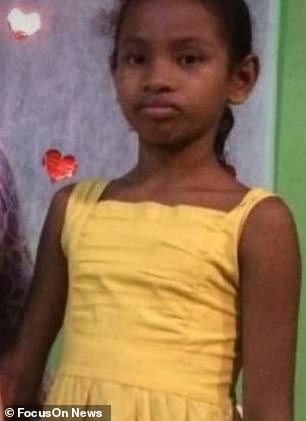 At a press conference, Coari police chief, José Barradas said: ‘The teenager lived with her parents in a rural area outside the city.

‘She did not realise, until two months ago when she began to feel pains in her abdomen, that she was five months pregnant.

‘Luana claimed she was ordered to go fishing with her father and was allegedly raped by him while there.’

A relative, who did not want to be identified, described the teenager as innocent and immature and said she was so traumatised by the abuse that she kept it secret.

It was only when her body started to change and family members became suspicious that she could be pregnant that they uncovered the truth.

Luana was persuaded by an aunt to reveal who the culprit was. But when the girl’s mother heard the news she refused to believe her husband was the father of his daughter’s child.

Chief Barradas alleged that Faba threatened to kill his daughter if she reported what was happening.

Barradas said: ‘Members of the family tried to step in and protect the child by alerting social services.

‘They reported the abuse to police and a warrant was issued for Tome’s arrest but before it could be executed Luana’s health deteriorated and she died shortly after childbirth’.

The incident caused outrage in the community with many protesting outside the court during the accused’s appearance.

Social services are yet to determine whether relatives will be given guardianship of the newborn boy.

Meanwhile, cops revealed the preterm ‘baby boy and are doing exceptionally well’ and thriving in the hospital’s neonatal unit, following his traumatic birth.

According to doctors he is ‘strong and already breathing without a ventilator’.