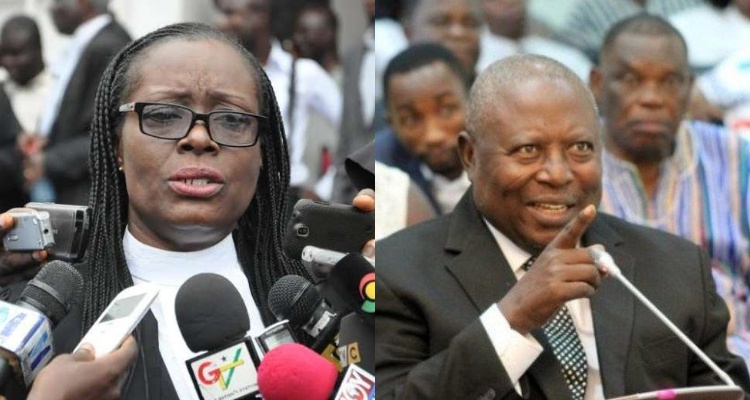 The former Special Prosecutor, Martin Amidu, has accused the Attorney-General, Gloria Akuffo, of been cowered into approving the controversial $1bn Agyapa deal.

The Attorney-General, Gloria Akuffo before she changed her mind advised the government against the controversial $1bn Agyapa deal, describing it as inimical to Ghana’s interest.

Her counsel was contained in a document, dated July 22, 2020, purported to emanate from the Attorney-General’s Department.

The A-G was responding to the Finance Ministry’s request for legal advice on the Minerals Income and Investment Act, the law which creates the Agyapa deal.

Mr. Amidu is suspicious of the swift change of position by the Attorney-General on the Agyapa royalty deal.

According to him, the Attorney-General who raised objections to the deal was cowered into approving it due to her lack of independence of the office.

Questioning why the presidency would  refer the completed Agyapa deal report by his outfit to the Attorney-General for further assessment, he said “how could the Attorney-General who had raised several objections to the transaction documents but was compelled by her lack of independence and fear of the stature of the principal suspects in what he described as the questionable scheme of the government to give a “No Objection” on 12th August  2020”

“… to such a serious suspected corruption infested transaction activity has the ethical courage and independence demanded of an Attorney-General to take any remedial action on the anti-corruption assessment report of the Office of the Special Prosecutor?”

The Attorney-General in her assessment of the $1bn minerals royalties deal described it as inimical to Ghana’s interest.

According to her, the Agyapa agreement runs in perpetuity and makes no room for any further legislation which offends the Minerals Act, which does not allow a Minister to enter into an agreement exceeding 15 years.

She also criticised the mode of payments under the agreement, which is in dollars, and recommended changes.

Describing the AG’s stance as a double standard, he said the government’s chief legal advisor was compelled by her lack of independence and fear of the stature of the principal suspects in ‘the questionable scheme.’

In a 68-point response to the presidency, Mr. Amidu also accused president Akufo-Addo of double standards.

He said president Akufo-Addo did not believe in the independence of the Attorney-General describing it as partisan which influenced his decision to create the office of the special prosecutor yet under his watch, he referred the report which interdicted members of his government to the AG.

“When this same President  shamefully,  with tongue  in cheek, realized that the anti-corruption assessment report on his foreign tax haven incorporated Agyapa  Royalties  Limited  Transactions was infested with suspected  corruption  activity he turned round to take Ghanaians for fools of short memory  by referring the Agyapa Royalties anti-corruption infested transaction to his partisan  Attorney-General to review the work of the independent Office of the Special Prosecutor so that his appointees  are given political protection by the Attorney-General for the suspected  commission of corruption and corruption-related offenses.”

“This is a clear demonstration of the trait of an innocent-looking flower but being the serpent under it,” he stated.