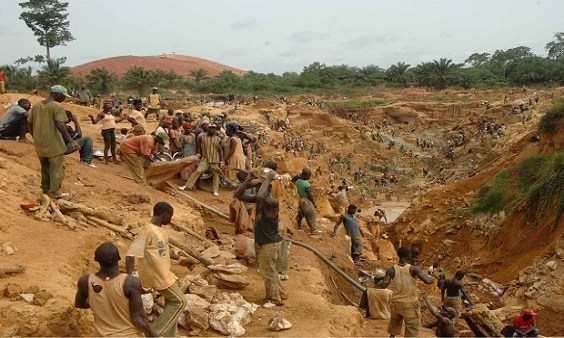 Convener of the media coalition against galamsey, Ken Ashigbe, has charged the security apparatus in the country to go after influential financiers of illegal mining.

It comes after a report by Joy News revealed illegal mining activities appear to be on the rise in the Oda river forest reserve in the Amansie Central District of the Ashanti Region.

Mr Ashigbe has however questioned the seeming inaction of the security agencies in the fight against galamsey.

“Another question we should be asking ourselves is what is our security society doing? Why is it that these things are going unpunished? They said that the people in the North have gone to buy this equipment. These are not cheap equipment so they’re not bought by the people we find in the pit.

“There are very influential, rich people, powerful people who are behind them who are providing the resources for this to happen. We need out intelligence officers to follow the money. Where is the money coming from so that all of these people can be brought to book” he said on Joy News.

This is, however, not the first time such a call has been made.

In September 2019 Col. William Nii Nortey , Commander of the Anti-Galamsey Taskforce mandated to ensure the activities of illegal miners are drastically reduced, Operation Vanguard, made a similar call.

He also cautioned against the importation of the equipment known as chanfan used by the miners.

Watch the full video of the Commander of Operation Vanguard:

Meanwhile, Minister of Environment, Science, Technology, and Innovation (MESTI), Professor Kwabena Frimpong-Boateng has expressed his frustration in the prosecution of the illegal miners.

He has laid the blame at the door step of the judiciary accusing them of doing little in the fight against galamsey.

According to the sector minister, the judicial system makes it easy for foreign nationals to escape the full rigours of the laws of Ghana.

“The court system is very frustrating for us. Foreign nationals go to court and are bailed. And I can imagine that some of them may even go to do what they do best in Ghana and then when is time they go to court, ” he indicated.

He stressed, “It’s very frustrating and sometimes even I [referring to his authority as a sector minister] cannot influence the court system, even the Attorney General finds it difficult because of the way the system is”.

The Act has amended the Minerals and Mining Act, 2006 (Act 703), and has increased the penalties for a person who buys or sells minerals without a licence or valid authority.

In the new anti-galamsey law, persons found guilty of engaging in illegal mining will get a minimum of 15 years and a maximum of 25 years jail sentence