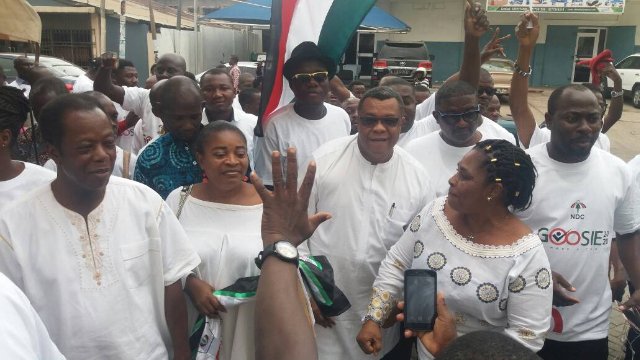 The campaign team of National Democratic Congress(NDC) presidential hopeful, Augustus Goosie Tanoh has responded to news items it claim are “fabrications and twisted truths” in a post on Facebook that is accompanied by images of news reports from two separate media organizations, Today Newspaper and MyNewsgh.Com, stamped with red “Fake News” stamps.

The two media organizations published the said articles that sought to create an impression that Mr. Goosie Tanoh was tagging every member of the NDC as corrupt on his campaign trail.

Also an online news portal, MyNewsgh.Com on october 19th published a story under the headline; MAHAMA’S NONSENSE GOVERNMENT WAS A SCANDAL INCUBATOR.

The story among others reads “The 11th flagbearership aspirant of the opposition National Democratic Congress (NDC) has said under the government of former President John Mahama, every single NDC member was perceived to be corrupt because of the many scandals recorded under Mahama, MyNewsGH.com has filed.”

These two publications, the Goosie Tanoh 2020 campaign team run by an organisation called Organising for Ghana, has rubbished, describing as fake news.

On the Facebook page of Organising for Ghana, they indicated that the Goosie Tanoh campaign is “focused on issues” and that they do not “hurl insults”.

This post is repeated on their twitter page where they tweet: “@GoosieTanoh’s campaign is focused on issues. We do not hurl insults nor focus on personalities”

The campaign team directs the public to view the truth in a video they indicate is the source of the “twisted truth”.

The fact according to the Goosie Tanoh camapign are that On the 11th October 2018, Mr. Goosie Tanoh launched his camapign at Anlo in the Volta region in a bid to lead the oppostion NDC as its presidential candidate for the 2020 polls.

After the camapign launched Mr. Goosie Tanoh visited a number of NDC delegates in the region where he enjoyed overwhelming support from rank and file of the party in that region.

Mr. Goosie Tanoh was on Sunday 14th October invited by the Tertiary Education Institutions Network (TEIN) NDC in the Volta region to chair a program the students had organised.

During the question and Answer session of the program, a young man told a heart-breaking story that, his peers calls him a potential thief simply because he is a member of the NDC and wondered how Goosie Tanoh could help redeem the dented image of the NDC.

In his response, Goosie Tanoh admonished the students not to entertain corruption no matter where it comes from, telling the students that if they hold their leaders accountable and Ghanaians begin to see that, they will not be called thieves anymore.

He stressed “If the people of Ghana begin to believe that we truly believe in probity and accountability, that we are willing to hold our leaders accountable, we are willing to discipline them, we will gradually, slowly regain their trust, and they will not call us thieves any more”

According to the camapign team, Mr. Goosie Tanoh at no point, before, during and after his presentation tagged NDC members as corrupt.

The team further urged the public especially members of the opposition NDC party to disregard the said stories.

The Goosie Tanoh camapign team appealed to journalists and media practitioners to adhere to professional ethical standards in order to justify the status of the media as the fourth arm of government.