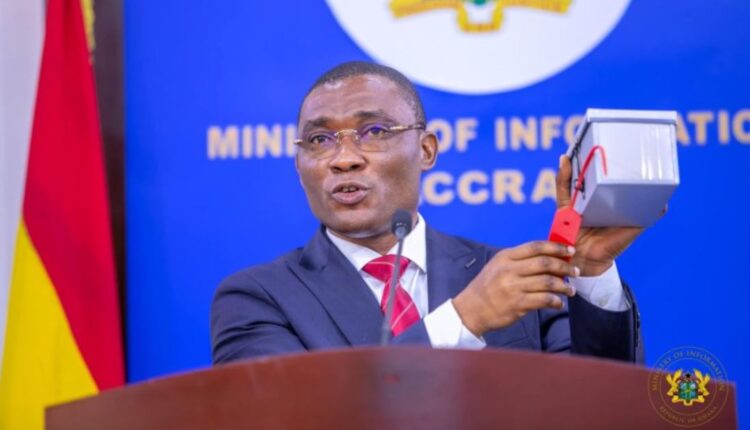 Deputy Minister of Lands and Natural Resources, George Mireku Duker, has said the government is not relenting on its efforts to fight people who are destroying the forests, water bodies and the environment in the name of making money.

He said despite the government’s effort to curb illegal mining activities popularly called ‘Galamsey’ and streamline the small-scale mining industry some people have decided to make the work difficult but the fight will continue unabated until the desired results are achieved.

Mr. Duker who doubles as the MP for Tarkwa Nsuaem in the Western Region was giving a highlight of the fight against illegal mining at the Ministry of Information yesterday.

He said that as part of the effort to deal with the situation, about 265 pieces of mining equipment have been destroyed in recent times, cautioning further that “those who are determined to destroy our heritage, will come after you.”

He said apart from destroying mining equipment to deter would-be offenders, the security task force arrested 26 illegal miners who were caught destroying water bodies and are being prosecuted.

The Deputy Minister said “the National Security Council and the Ministry tasked the Ghana army to tackle illegal mining within the Western Region. Southern Command was tasked to conduct follow-on preparations to clear recalcitrant illegal miners within the Western Region. The aim of the operation was to halt the return of illegal mining in major river bodies and its tributaries and to maintain the momentum of the Ghana Armed Forces in the fight against these threats.”

He said “the follow-on operation focused on River Ankobra and its tributaries in the Western Region. The operation was conducted from Saturday, 4 December to Monday 6, December 2021.”

“A total of 265 assorted illegal mining items which were found within the red zones of 100metres of Ankobra River and its tributaries were destroyed. A total of 26 suspects were arrested. One motorbike and 22 mobile phones for illegal mining were handed over to civil police at Prestea and Wassa. Let’s commend the military for this operation,” Mr. Duker said.

As part of measures to provide livelihood opportunities for the hitherto illegal miners, he said that the government has adopted a multifaceted approach in dealing with the menace which includes the promotion of safe and environment-friendly mining activities, and said the community mining scheme which is a substitute for the illegal mining, will create jobs and ensure the protection of resources.

“We have developed a small-scale mining community manual. The manual is for community mining school to comply with,” he said.