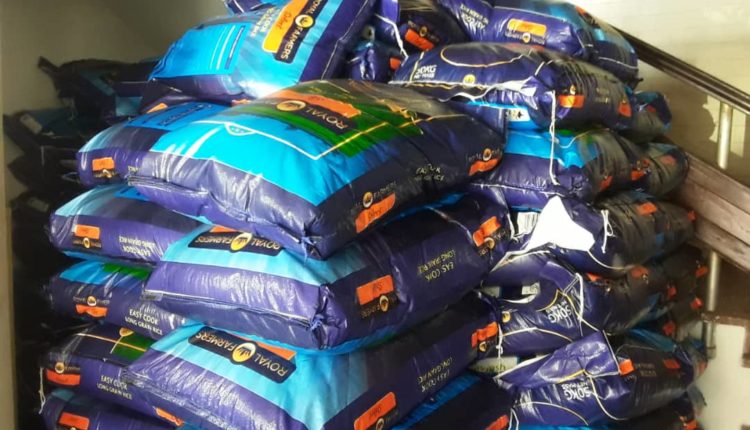 The Ministry of Gender, Children and Social Protection (MoGCSP) has begun the distribution of food items to caterers under the Ghana School Feeding Programme (GSFP) across the country.

The items include Ghana Rice (50kg), Cooking Oil (25 litres), tin tomatoes and texturized Soy Protein (TSP) which are all sourced from local farmers and processed by local companies.

The caterers will no longer have to contract huge loans from the banks to pre-finance the cooking but will receive the food items on credit from GSFP and pay back only when the government releases their payment.

The distribution which began on January 15, 2020 in some regions was as a result of an agreement the Ministry reached with the National Buffer Stock Company Limited for the supply of these items.

According to the Minister for Gender, Children and Social Protection, Cynthia Mamle Morrison, the food supply is ultimately meant to relief the caterers from the huge financial burden involved in pre-financing or procuring food items for the preparation of meals for the school children.

She said the caterers, hitherto, used to procure food items by themselves from different suppliers and markets at different prices, which accounted for over 80 per cent of their total cost.

The Minister expressed her profound appreciation to the President, Nana Addo Dankwa Akufo-Addo and the Chief Executive Officer of the National Buffer Stock Company Limited, Mr. Abdul-Wahab Hanan Aludiba for making the initiative a reality.

A statement issued by the Ministry of Gender, Children and Social Protection dated h January 14, 2020, requested all the Metropolitan, Municipal and District Assemblies to offer the needed cooperation for the smooth implementation of the initiative.

Ms  Morrison noted that the distribution of the locally produced food items to the caterers is not only to prepare wholesome foods for the school children but also to fulfil the NPP’s manifesto promise of encouraging the consumption of locally produced foods as well as creating jobs for women in the local communities.

The party also promises to boost agricultural production; reducing poverty among local farmers and increase income at the district level among others.

She was upbeat about the potential of the distribution of the food items to increase school enrollment and retention and to ultimately meet the Sustainable Development Goals.

The Minister is optimistic that it will also eliminate the inconsistencies in cooking on school-going days by some caterers due to insufficient funds and sometimes shortage of food items.

“With this initiative, all that the caterers need to do is to just buy a few local ingredients and they are good to go to the kitchen satisfactorily,” the Minister emphasized.

Ms  Morrison was confident that the food supply will be sustainable, as a result of the government’s Planting for Food and Jobs initiative and the high agricultural productivity by smallholder farmers in the districts.

The Minister disclosed that she will personally join forces with the management of Ghana School Feeding Programme to monitor the distribution of the items to ensure the caterers do not abuse the opportunity by selling out the food items for personal benefit.