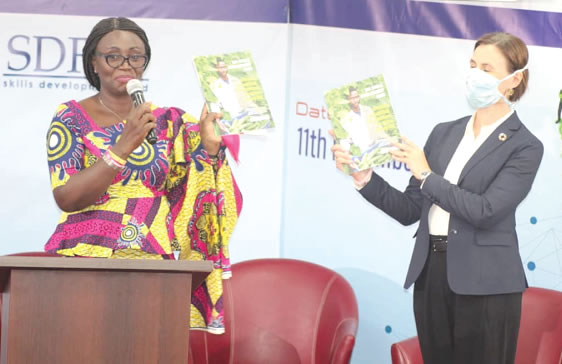 The fund is expected to become operational in January 2021.

The investment comes after the successful implementation of phase two of the SDF, which is expected to come to an end this year.

The SDF is a multi-donor-funded intervention initiated by the government in 2011 to provide critical solutions for some of the most pressing challenges facing the development of industry, skills and technology.

The Danish government, which is one of the major donors of the SDF since its inception in 2011, will no longer fund the project in subsequent years.

The Deputy Minister of Education in charge of Technical and Vocational Education and Training (TVET), Ms Gifty Twum Ampofo, announced the government’s financial commitment at the opening of the fifth Skills Development Fair, which was held virtually from Accra yesterday.

“Although the SDF II is coming to an end, the government, through the Ministry of Education, is taking steps to institutionalise the SDF by including it in the Education Regulatory Bodies Act 2020.

“Under the Commission for Technical and Vocational Education and Training in the act, the Ghana Skills Development Fund Committee is established as one of the standing committees,” she said.

The $60-million seed grant, according to the deputy minister, would serve as the provision of competitive grants to private enterprises for expanded employment through skills.

That, she said, would help Ghana consolidate the progress made by the SDF over the years, adding: “It will make it a permanent feature in our skills development agenda as a country.”

Beyond the creation of the GSDF, Ms Ampofo explained that the objective of the project was to support skills development and upgrade jobs for Ghanaians.

She said the project was also aimed at helping the government to better respond to the imperative of creating more decent jobs for the youth and the rapidly growing labour force.

The project, she added, comprised multiple activities geared towards promoting the employment and productivity of workers, as well as initiatives to strengthen the efficiency and capacity of government agencies to supervise the various activities that would be implemented under the project.

Ms Ampofo commended the Danish government for supporting Ghana over the last decade to execute the project.

“I believe more projects like this will go a long way to ensure that we truly have a Ghana Beyond Aid,” she said.

The deputy minister urged beneficiaries of the fund to work closely with the Council for Technical and Vocational Education and Training (COTVET) through registration and accreditation in order to institutionalise all the skills training acquired and upscale them to ensure sustainability.

For her part, the Deputy Head of Mission at the Denmark Embassy, Ms Birgit La Cour Madsen, said skills development was an essential prerequisite for realising the government’s ambition to move the economy beyond aid, for which reason its importance could not be underestimated.

“Better skilled workers equipped with the technical and vocational skills that industry and the private sector in general are looking for are essential to ensure that the transition from aid to trade expands opportunities for ordinary Ghanaians.

“In Denmark, we have known the value of vocational training for decades. Many of our best known and most successful companies were founded by skilled workers, excellent at their trade,” she explained.

Ms Madsen noted that although the Danish government would be focusing elsewhere on the continent, it did not mean that the partnership between Denmark and Ghana would come to an end.

The Chief Executive Officer (CEO) of the Association of Ghana Industries (AGI), Mr Seth Twum Akwaboah, stressed the need for the government to make annual budgetary allocations to skills development in the country.

“We shouldn’t be tired of funding skills development in the country. On a yearly basis, the government should make budgetary allocations to skills development; that way, we will be assured of constant support to ensure sustainability,” he said.