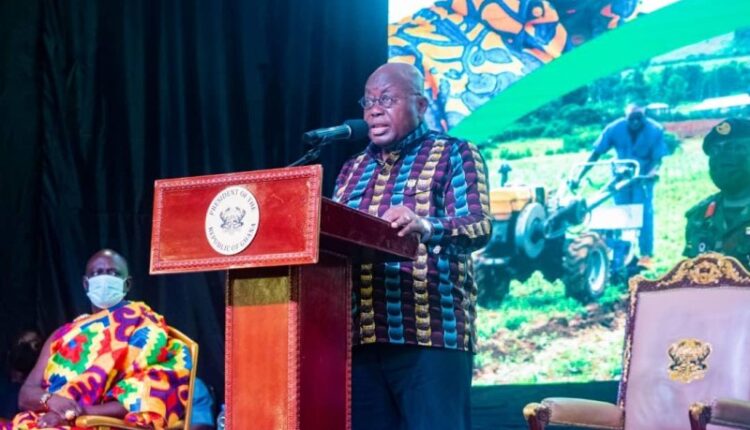 President Nana Addo Dankwa Akufo-Addo, has assured Ghanaians that the government will promote responsible small-scale mining as it provides an avenue for them to participate in the mining industry and contribute substantially to the gold exports.

He stated that “My Government is not against small scale mining, but in full support of responsible small-scale mining activities”

President Akufo-Addo said available data revealed that the small-scale mining industry, accounted for over 40 percent of the gold exports, and played a critical role in making Ghana the leading producer of gold in Africa.

“The Small-scale mining sector must, therefore, be promoted and encouraged, and we will do all that is necessary to advance it for our collective benefit, he announced.

The President gave the assurance on Monday when he launched the National Alternative Employment and Livelihood Programme (NAELP) at the University of Mines and Technology (UMaT), Tarkwa in the Western Region.

It was on the theme “Creating Alternative jobs to illegal mining for sustainable national development”.

The programme, according to the President, “seeks to ameliorate the unavoidable and unintended hardships which our efforts to sanitize the Small-Scale Mining sector has created, particularly in the five Regions that Operation Halt II carried out its operations”.

He added that “given that most of our degraded lands are due to illegal mining activities, it is just fitting, that any Programme targeting illegal mining includes a reclamation Programme”.

The component of the programme would restore such lands into economically viable lands, creating job opportunities for the youth, landowners, and communities at large, the President said.

He also said “in keeping with our commitment to promote responsible, viable and sustainable small scale mining, the programme will also include a Community Mining Scheme, which is intended to be the model for all small scale mining activities in the country”.

Although government had made significant gains in the fight against illegal mining “some nation wreckers have resorted to mining in the night, to evade the regulatory and security agencies. But let me assure you, that we have enhanced the monitoring of these activities, and all those involved would be made to face the law”.

He emphasized that “what we cannot do, and will not allow it to happen, is to permit mining activities that threaten the environment which sustains our lives and livelihood of generations yet unborn”.

“The Community Mining Schemes would be supported by the Mine Support Services, and together, are expected to create some two hundred and twenty thousand direct and indirect employment”.

Mr Samuel Abu Jinapor, the Minister for Lands and Natural Resources who doubles as the Member of Parliament for Damongo, explained that so far, five community mining schemes, with 20 concessions, were launched in Mmampehia in the Ahanta West Municipality, Kwabre-Nuba in the Jomoro Municipality, Adukrom in the Ahafo Ano South-East District; Jacobu in the Amansie Central District and Akyim Abaam in the Kwaebibrim District.

He said the five Schemes, have the capacity to employ some 26,300 people in direct and indirect employment.

“We expect to launch a total of 18 Schemes with 100 concessions, by the end of the year. Our commitment is to deliver 100 well regulated, responsible, environmentally sound community mining schemes, across the country, before the end of 2022. They will have functioning offices, proper database of miners, environmental officers on site, changing rooms for miners and sick bays” he added.

He entreated all affected miners and individuals to participate in the programme since it would help create jobs in the five mining Regions of which Western Region was part, added that, “I am firmly convinced that we will succeed together in taking advantage of this initiative”.