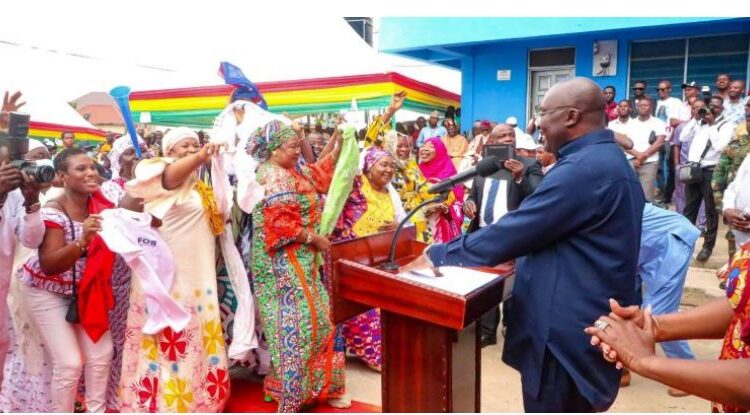 A total of 2,406 units of streetlights have been installed in more than 40 Zongo communities by the Zongo Development Fund to improve the lighting system and security.

The installation of the streetlights constituted one of the over 300 projects being undertaken by the Fund across the country to enhance development in Zongo Communities.

Some of the projects and interventions being implemented by the Fund include classroom blocks, roads, astro-turfs, mechanised boreholes, drainage systems, ICT centres and bridges, as well as providing employable skill training for the Zongo youth in beads-making, leather works, dressmaking, liquid soap preparation among others, to empower them to be financially self-reliant.

Vice President Mahamudu Bawumia announced this in Accra on Wednesday when he inaugurated a six-unit classroom block for the Tunga Islamic Community School at Dansoman in the Ablekuma West Municipality of the Greater Accra Region.

Other ancillary facilities attached to the six-unit block include a washroom, staffroom and a room for a computer laboratory.

The Zongo Development Fund is the frontline agency and vehicle through which the government seeks to develop the Zongo communities and improve the standards of living of the people.

The ceremony attracted pupils, parents and guardians, Madam Ursula Owusu-Ekuful, Member of Parliament for the area;l, Zongo chiefs, Imams and the clergy.

Vice President Bawumia stated that since Ghana attained independence in 1957, no government has ever allocated a budget deliberately for the development of Zongo communities.

Therefore, he said, the establishment of the Fund dedicated to Zongo communities by the Akufo-Addo government was indisputably unprecedented.

“In the Greater Accra Region for instance, we have undertaken a massive renovation and upgrading of the popular Institute of Islamic Studies (Research) at Nima, work is also currently on-going for the comprehensive rehabilitation of Ansarudeen Islamic School founded by His Eminence the National Chief Imam, Sheikh Osman Nuhu Sharubutu, at New Fadama,” the Vice President said.

“Additionally, government, through the Zongo Development Fund has provided teaching and learning materials to the Islamic Education Unit of the Ghana Education Service for distribution to schools in several Zongo Communities in the Greater Accra Region,” he added.

Dr Bawumia noted that the interventions by the Fund were commendable efforts aimed at bridging the yawning gap in the educational fortunes of Zongo communities vis-a vis other communities.

He said communities such as New Fadama and Madina had witnessed remarkable transformation in social, recreational and sporting activities through the construction of community Sports and social centres and urged the people to take good care of the facilities.

Dr Arafat Sulemana Abdulai, the Chief Executive Officer of the Zongo Development Fund, expressed the government’s commitment to improving the living conditions of people in the Zongo Communities.

Madam Ursula Owusu-Ekuful said the Akufo-Addo Government did not discriminate in sharing the national cake and believed that maintaining the government in power would bring more infrastructure projects to Zongo enclaves.