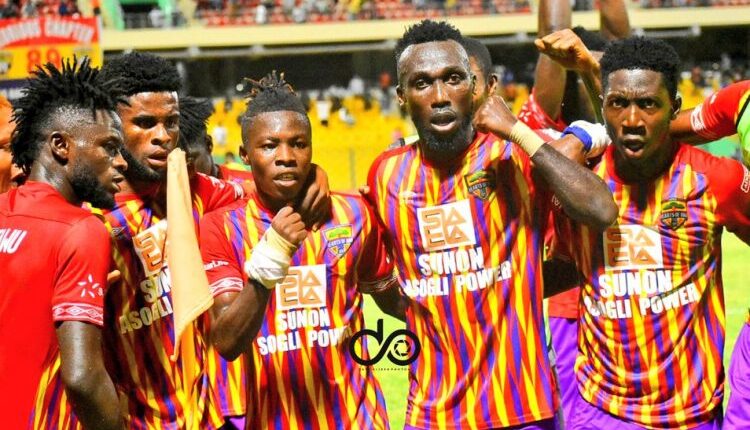 Accra Hearts of Oak recorded a 2-0 win over Medeama SC to stay top of the Ghana Premier League standings with a three-point lead.

Goals from Salifu Ibrahim and Benjamin Afutu ensured Hearts maintained their lead at the top and go three points above Kotoko who are yet to play.

AshantiGold SC returned to winning ways after recording a 1-0 win over Ebusua Dwarfs at the Obuasi Len Clay Stadium,

Seth Osei scored the only goal of the game in the 54th minute to hand the Obuasi based team the maximum three points.

The win moves the Insha Allah boys out of the relegation zone into 15th place on the log, above Liberty Professionals on goal difference.

At the Crosby Awuah Memorial park in Anyinase, home side Karela United beat Legon Cities 2-0 to bring an end to the Royals’ impressive five-game run.

Umar Bashiru put the home team ahead from a spot-kick in the 27th minute before Richard Berko sealed the win in the 83rd minute when he scored the second goal.

Clinton Duodu and Emmanuel Annor found the back of the net as Bechem United secured a 2-0 win over Berekum Chelsea.

The win ends Bechem’s six game winless run and sees them move three points above Chelsea who are two points above the relegation zone.

In Dormaa, Aduana Stars brought an end to their three-game winless streak with a 2-0 victory over Liberty Professionals.

Sam Adams gave the hosts the lead in the 17th minute before Bright Agyei scored from the spot in the 55th minute to secure maximum points.

The result sees Liberty drop back into the relegation zone.

In Sogakope, WAFA were held to a 1-1 draw by Dreams FC at the Red Bull Arena.

Augustine Boakye put the hosts in the lead after 41 minutes but Dreams leveled right before half-time through Ali Huzaif to clinch an all-important point.

Elmina Sharks managed to climb out of the relegation zone after beating Techiman Eleven Wonders 2-1.

A brace from Benjamin Boateng in the 2nd and 5th minute was just enough to give the home team all three points and move them to 13th on the league log, a point above Eleven Wonders.

Kumasi Asante Kotoko will be hoping for a win over relegation-threatened Inter Allies when they travel to the Theatre of Dreams at Dewu.

Kotoko will be looking to secure all three points to keep the pressure on rivals and current league leaders Accra Hearts of Oak.