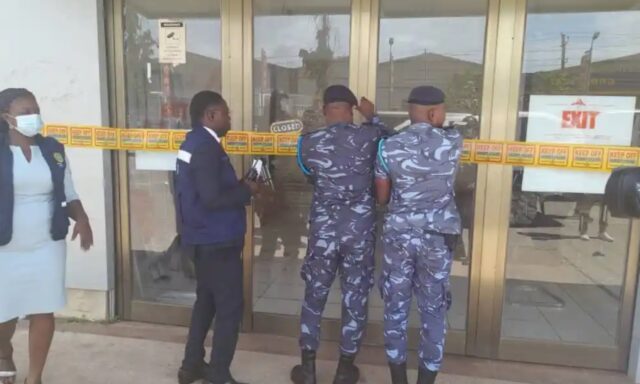 The e-invoicing system makes it possible for the Ghana Revenue Authority to monitor the daily transactions of taxpayers making it impossible for them to under-invoice or avoid the payment of VAT on their sales.

The Ghana Revenue Authority introduced the e-invoicing system for VAT collectors which started on October 1, 2022, to 600 large taxpayers that generate more than 90 percent of VAT revenue.

The Enforcement Officials began their operation at the China Mall located at Spintex but it was not in operation at the time of their visit, but the Officials suspect someone may have alerted them on the GRA decision to inspect the application of the e-invoicing system usage in their company.  There was another branch along the same Spintex Road that had workers working by then but had to stop due to the directives of the Enforcement Officials. Other branches at Amasaman and Ashaiman were also closed.

The same exercise was later on conducted at some Palace Malls located in the country for failure to apply the e-invoicing VAT system.

According to the Area Enforcement Manager of GRA in charge of Accra Central, Mr. Joseph Annan,  the Ghana Revenue Authority is doing its possible best to engage the management of businesses in Ghana to educate them on how to start the e-invoicing system but it seems most of them have failed to comply with the new directive by the Authority.

In a discussion with the Ghana News Agency keenly followed by the Ghana Report, concerning the closure of the four shops, Mr. Annan said “when we got to the premises, the shops were not in operation, so we only added the Commissioner-General’s Seal”.

According to Mr. Annan, the places will remain closed until the management of the Malls complies with the Authority’s directive. He added that going ahead to remove the seals at the entrance without prior notice from the Ghana Revenue Authority is an offense.

He added that “the  Authority had selected some businesses to commence the pilot of the system and this time they would enforce the law to the fullest and all branches of these businesses would be closed until their various managers fix the system”.

“We will continue to pursue all who have failed to fix the system until they comply”, he added.