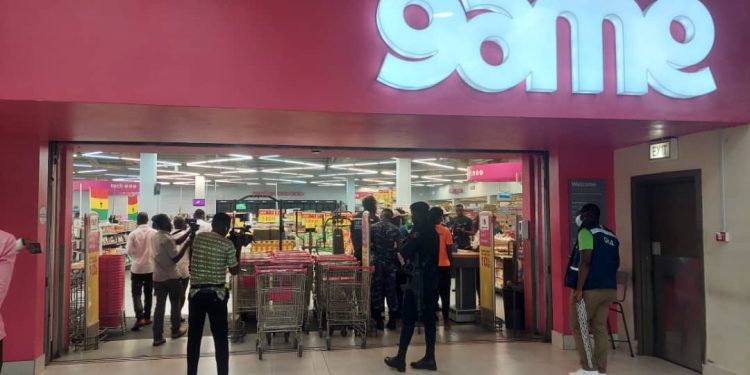 The Ghana Revenue Authority(GRA) has shut down the Game shopping centre at the Accra Mall for failure to comply with GRA’s E-VAT Invoicing system.

All customers making purchases at the time of the visit were asked to move out after the management of the mall consulted with their head office in South Africa.

This brings to 16 the number of shops and supermarkets locked up by the tax collector since the exercise began on Monday.

Major shops like Palace Mall and China Mall have also been closed down.

The GRA has stressed that it will not relent to ensure compliance with its electronic invoicing system.

Addressing the media earlier, Deputy Commissioner of operations in charge of GRA’s Domestic Tax Revenue Division, Kwasi Eghan, said he was hopeful that all businesses expected on the platform would do so by the end of the week.

“I am sure some people are just trying to see what will happen if they do not hook on. We will close you down. If we close down, you are not going to reopen until we are done with the process of hooking you up,” he said.

GRA rolled out the e-invoicing system for VAT collectors from October 1, 2022, to 600 large taxpayers that generate more than 90 percent of VAT revenue.

Unlike the manual system, the e-invoicing system allows the GRA to monitor live transactions in companies where it has been deployed, thereby making it impossible for taxpayers to either under-invoice or avoid the payment of VAT.

GRA took it upon themselves to move around major shops in Accra to check their records concerning the E-VAT system.

Several shops were found wanting and closed down.

Already, officials of the GRA have shut down five branches of the Palace Mall.

The affected branches are; Labone, Spintex, Atomic roundabout and Weija.

Five branches of China Mall were also closed down between Monday and Tuesday.

In a related development, the Regal Chinese Restaurant in Osu has also been shut down.