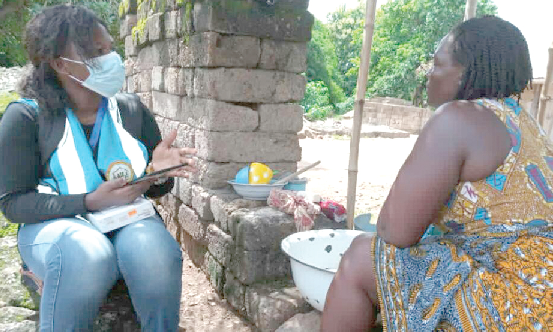 The Ghana Statistical Service has announced a seven-day mop-up in the ongoing 2021 Population and Housing Census (PHC) to complete work in the outstanding enumeration areas.The mop-up exercise will run from Monday, July 12 to Sunday, July 18.

The 2021 PHC, which commenced on Sunday, June 27, officially ends today, Sunday July 11.
Professor Samuel Kobina Annim, the Government Statistician, who announced the mop-up at a press briefing in Accra, said 80 per cent of data on the expected households had been received as of the 12th day of the enumeration.
He said the North East Region had the highest data of 97 per cent enumeration, while the Greater Accra Region was the lowest with 55 per cent.
“To put these figures in context, the numbers are based on the data that has been transmitted electronically to the Headquarters. In some areas, enumerators are unable to transmit their data due to the poor or absence of Internet connectivity,” the Professor said.
Out of the 272 statistical districts, the Government Statistician said 181 were on course to complete the data collection as at today, Sunday July 11, 2021.
He said currently, the completion rates in some districts based on the data received by the 12th day indicated that the enumeration would have to continue.
They include Ga West, Ga North, Ayawaso West Municipal, Adentan Municipal, Ga East, Ledzokuku, La Nkwatanang-Madina Municipal, Kpone Katamanso, Shai Osudoku and Tema West.
The Professor explained that some areas in Accra were recording low data due to residents’ unwillingness to participate, boundary issues and unavailability of respondents, especially persons leaving early for work and returning late in urban areas.
He noted that some farming and mining communities were larger than the expected number of structures or the population in rapidly expanding urban areas.
The Government Statistician said field closure activities had begun in Supervisory Areas where work had been completed and appealed to the public who were unwilling to be enumerated to cooperate with the enumerators.
He, however, said the interest being exhibited by the public to be counted was high and that the call centre had received more than 2,000 calls from people with concerns of not being listed or enumerated; questions about the exhaustiveness of the interview, and concerns about enumerator identity.
In some cases, the Professor said some of the members from the public were calling the District Census Officers, Regional Statisticians and other Census Officials directly.
“GSS wishes to assure the public who are yet to be counted that no one will be left behind. To persons yet to be counted, please make yourselves available by using the callback card or informing your neighbours when you will be available,” he stated.
“Members who have not been counted should contact the Census call centre on the toll free number: 0800426426 or on 0591476893, 0591476895, 059476884, and 020685015,” he added.
The 2021 PHC will provide important information to support evidence-based implementation of the national development agenda and support the tracking of achievements of the Sustainable Development Goals and Agenda 2063 of the African Union, among others.
The 2021 PHC is seeking to gather information on key issues, including travel history of household members who have migrated abroad, Socio-demographic characteristics, literacy and education, economic activity.
The rest of the indicators are difficulties in performing daily living activities, ownership and usage of Information Communication Technology devices, children born to women, 12 years or over, deaths of household members within the past 12 months, housing conditions, sanitation and source of water, lighting and cooking fuel.
The listing of structures started on Sunday, June 13, 2021.
Story By GNA
CensusCensus NightGhana
Leave A Comment
Cancel Reply
You might also like
Headlines