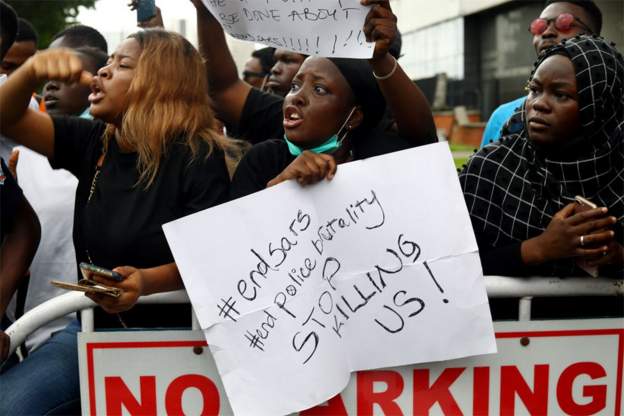 A man has testified at a judicial inquiry in Nigeria’s commercial hub of Lagos that police officers of the now-disbanded Special Anti-Robbery Squad (Sars) tortured him and extracted two of his teeth after arresting him in 2014.

He was the first person to testify in front a panel that has been set up to investigate human rights abuses carried out by Sars.

Lagos state Governor Babajide Sanwo-Olu has said that the scope of the panel has been expanded to include the shooting at the Lekki toll gate on 20 October.

Amnesty International and eyewitnesses say the military opened fire on peaceful protesters at the toll gate, killing at least 10 people. Two people were killed in another part of Lagos on the same day, Amnesty said.

The military has denied involvement in the shooting.

In his testimony, the man said that his property had been forcefully taken by Sars officers and the police had refused to pay him compensation despite a court order.

Tuesday’s proceedings were held up for almost two hours as the youth representatives on the panel refused to sign an oath of secrecy. The dispute was later resolved.

Independent investigations into police abuses were a core demand of the protesters who rallied across Nigeria for more than two weeks.

The chair of the panel, Justice Doris Okuwobi, was quoted by Reuters news agency as saying that the panel was independent from the government and would ensure justice for victims of police brutality and “for those affected by the unfortunate incident of the shootings by the military”.

She was also quoted as saying that none of the 15 complaints received so far related to the shooting in Lekki, an upmarket suburb in Lagos.