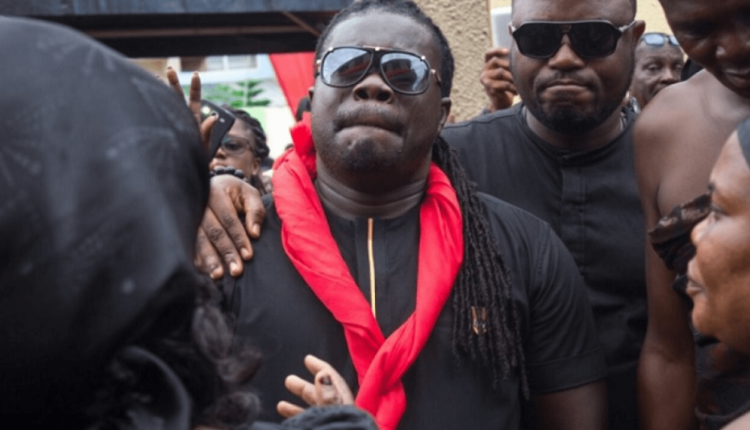 The family of former MUSIGA president, Obour, have buried the musician’s father without the consent of health authorities in the Ashanti Region.

Obour’s father, Nana Boansi Osei Kuffour, who was also the Chief of the Juaso Oyoko clan tested positive for the deadly COVID-19 two months ago.

He was declared dead on March 27, at the Greater Accra Regional Hospital.

Two months later, health authorities in the Ashanti Region authorities have distanced themselves from the burial of the chief who returned from the United Kingdom, shortly before his death.

The late chief was laid in state over the weekend, but health authorities say they were not aware of the ceremony.

They have argued that the burial may be a breach of the COVID-19 state protocols.

The musician’s family transported the body from Accra to Juaso.

He was laid him in state in grand style and his family performed burial rights for him at Juaso in the Asante Akyem Municipality of Ashanti.

Family members kept vigil till he was buried at the Royal Cemetery at Juaso.

The Regional Director of Health, Dr Emmanuel Tinkorang told Luv News that the local COVID-19 teams were not notified.

“All this was done without the participation and knowledge of the Regional and the Municipal Health Directorates.

“All health teams were not told of this burial, even my Municipal Health Directorate was not informed. I don’t know, maybe they came with their burial team from Accra,” he indicated.

But a member of the family, Agnes Asiamah Boakye, has maintained the family had the permission of the authorities.

“We were told he died of Covid-19.  But there were rumors that he had being cremated because of his COVID-19 status. Because he is a chief, we had to dispel the rumors.

“So, we sought permission from authorities for him to be laid in state for few people to see him, identify him and pay their last respects. We bought a coffin made of glass covering, so it prevented people from getting into direct contact with the body.”

“I know Nana was not well before so I don’t believe he was killed by that coronavirus sickness.  People who were close to him know him and were not afraid of him because they knew what killed him,” a resident said.