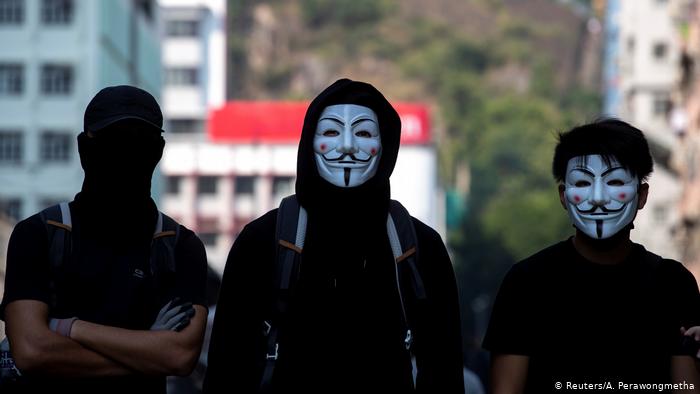 Carrie Lam announced that the use of face masks at “unlawful” and “unauthorized” protests will constitute as illegal under the new anti-mask measure.

Local media had reported that Lam was planning to bypass the legislature and that an anti-mask law would be effective as of midnight.

Many legislators and activists warned that the ban could be counter-productive and difficult to enforce in Hong Kong where tens of thousands of people have already defied police bans on public rallies in the last six months.

Protesters demonstrated against what they claim is a government scare tactic and a bid to quash 18 consecutive weeks of sometimes violent protests.

Thousands of protesters, all wearing masks, chanted slogans calling for democracy and police accountability as they marched through the city’s business district.

“I want to wear face masks” they chanted, and “Wearing a mask is not a crime.” Many cars honked in support while stuck in traffic due to the protests.

One demonstrator told a local broadcaster that the people of Hong Kong would not be intimidated by the government’s tactics.

“Will they arrest 100,000 people on the street? The government is trying to intimidate us but at this moment, I don’t think the people will be scared,” he said.

William Lam, a professor at the Chinese University, warned that Hong Kong’s use of the Emergency Ordinance for the first time in over half a decade is a dangerous step. The law, stemming from British rule enacted in 1922 and 1967 to quell riots and strikes, will give Carrie Lam broader powers to implement regulations in an emergency.

“If the anti-mask legislation proves to be ineffective, it could lead the way to more draconian measures such as a curfew and other infringement of civil liberties,” said Willy Lam. What began as a protest against an extradition bill, the pro-democracy movement has since evolved into an anti-Beijing campaign. More than 1,750 people have been detained so far.