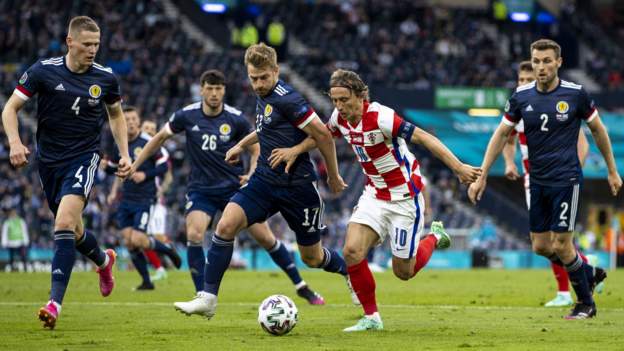 Even the most ardent Scotland fan could only gasp in broken-hearted admiration. If your dreams were going to be crushed, the fatal blow may as well be a goal from the heavens.

Luka Modric was – not surprisingly – the man who provided it, stepping onto the ball outside Scotland’s box to score one of the best strikes of this or any other European Championship.

Not bad for a 35-year-old who has faced murmurs of being “past it”.

Scotland knew the midfielder was the danger man. Knowing it and stopping are two different things, though.

Any lesser mortal would have been tempted – to borrow the Glasgow vernacular – to “leather it”, put the laces through the ball and hope it hits the target. Not Modric, the little magician, who chose precision over power.

The 35-year-old was the calmest man inside Hampden as he took a step and caressed an outrageous outside-of-the-boot strike into the top left-hand corner.

Scotland goalkeeper David Marshall was helpless. The home nation, having fought back with a superb Callum McGregor equaliser shortly before half-time, were crestfallen and heading out of the tournament.

Still setting records at 35 – the numbers

Modric has seen it, done it, and won it at the top level. In March, he became Croatia’s record cap holder, a total that now stands at 141 appearances.

Notable team-mates chose the incredible achievement of helping Croatia finish as World Cup runners-up in 2018 as the opportune time to bow out of international football. The likes of Mario Mandzukic and Danijel Subasic were joined by Ivan Rakitic in calling it a day.

All three are younger than Modric, who could have decided enough was enough as he seeks to eke every last drop out of his club career, where he is still pulling the midfield strings for Real Madrid.

But he chose to stay on, and his iconic status has just gone stratospheric in his homeland. The captain had yet again led by example in Croatia’s hour of need. 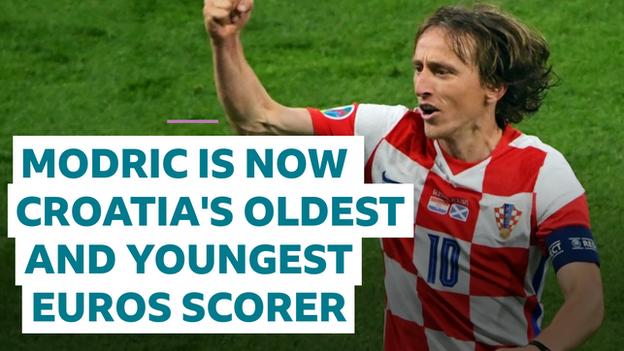 Modric ran the show in the first half as Croatia took the lead through Nikola Vlasic, only for their momentum to falter. McGregor – forgotten amid the recent Billy Gilmour Scotland hype – thundered home his first international goal on his 35th cap as the majority of the Hampden crowd erupted in joy.

Then came Modric’s moment of genius – but the outrageous strike was just one part of his repertoire. He weighed in with an assist too, delivering the corner for Ivan Perisic to glance home Croatia’s third and put the result beyond any doubt.

Whatever way you slice it, Modric was a standout. He had 115 touches – 16 more than any team-mate – and his 98 passes – almost two thirds of them in Scotland’s half – were the most of any player on the pitch.

His performance – man of the match by a distance in the BBC Sport player rater – comes with some neat symmetry too. He is now the oldest and youngest player to score for Croatia at the Euros. Having netted against Austria at Euro 2008 (at a sprightly (22 years and 73 days) he has set another record, this time aged 35 years and 286 days.

As Scotland captain Andy Robertson succinctly put it at full-time: “Modric ran the game and scored a wonderful goal – that’s why we fell short.”