A peculiar situation that caused a man to hide his wife’s dead body in their apartment for several months is being investigated by police in Abuakwa, in the Ashanti Region, after he was also found dead.

The 48-year-old man, Samuel Jackson, is believed to have killed his wife, Ernestina Jackson, three months ago and hidden her body with packs of ice in an attempt to preserve the decomposing body.

Curious neighbours who did not see the couple for several months informed the police, who broke into their apartment to conduct a search due to the foul smell within the compound.

The police found the man’s dead body in the family’s bathroom, sitting on the toilet. Two children of the couple, aged 11 and 13, were also rescued in an unconscious state.

The children were locked up without food and water in the apartment for days with the decomposing bodies of their dead parents.

The traumatized children of the deceased are currently on admission at the Abuakwa Polyclinic.

Neighbours told the Abuakwa police that the family returned home sometime in May from an outing, parked their unregistered Ford Expedition SUV, and entered their apartment.

That was the last time they saw the family. 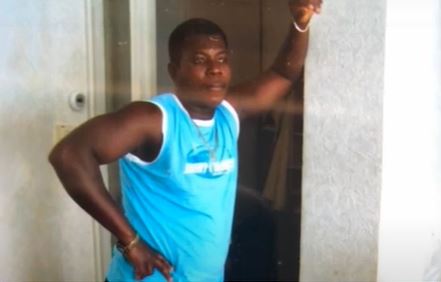 According to the neighbours, the Jacksons, a prosperous family, moved to Maakro Plot 10 around seven years ago and resided in a rented flat. They never socialized with other residents, as they live independently.

It is not clear what led to the death of the two.

Medical Superintendent at the Polyclinic, Dr. Mensah Manye, explained that the children were responding to treatment.

“It was a long month of traumatization in which, from what I gathered from the police, they were locked up in a room like for months. The extent of the decomposition and the odour of the smell is not the best.

“But I understand the man put an ice pack on the woman on the floor. That one too, I can’t tell what he was trying to do, and he himself died in the washroom whilst going to the toilet,” he added.

“The elderly one can not still talk well. I don’t know if it’s because of the trauma. Maybe some psychologist may come in to actually talk to them before they can get out of that situation,” he told Joy News.