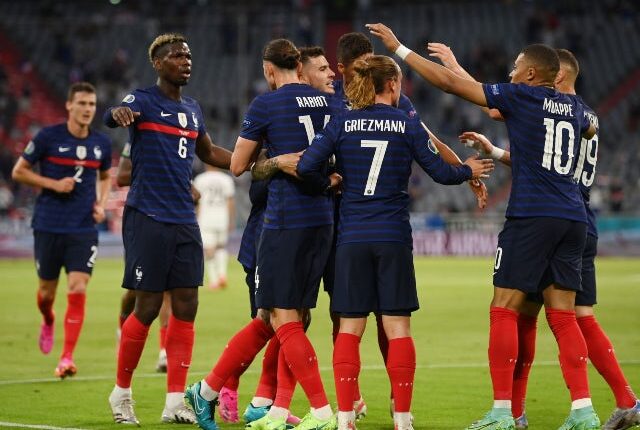 Tournament favourites France were marginally the better of the two sides, but appeared to be in third gear for much of it.

Paul Pogba sent the ball over the bar from a corner with his shoulder, Kylian Mbappe had an angled shot saved, he and Karim Benzema had goals ruled out for offside and Adrian Rabiot hit the outside of the post.

Germany came into the finals with big questions over their best XI as well as their chances of success after an uncharacteristically turbulent few years, but proved typically competitive finals opponents.

Thomas Muller – another player recalled after being jettisoned by Low – headed wide, with Ilkay Gundogan slicing an effort past the post from a good position in the box and Serge Gnabry seeing a shot deflected on to the roof of the net.

It was not just the actual football that was of interest either.

There was a hint that Germany defender Antonio Rudiger may have bitten the shoulder of Pogba in the first half, although replays proved inconclusive.

This came after a Greenpeace protestor had parachuted into the stadium, shedding equipment as he crashed to the pitch before being hurried away by security.

France’s win means they and Portugal, who beat Hungary 3-0 in Budapest earlier on Tuesday, take the early initiative in a highly competitive Group F.