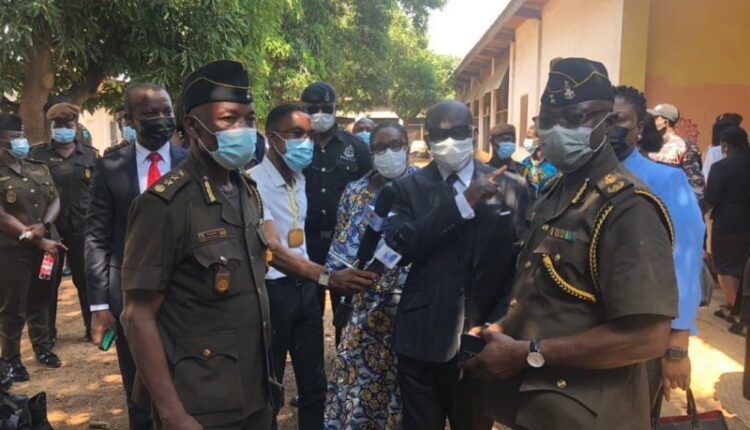 I am not an “unconcerned jailor”- AG

Mr Godfred Yeboah Dame, Attorney General and Minister of Justice, says he cares about the welfare of persons serving sentences in prisons and is not an “unconcerned jailor”.

‘‘The Attorney-General is not just an unconcerned jailor who ceases to care about the plight of persons serving various sentences in prison or even remand prisoners, thus, the purpose of this visit is to familiarise ourselves with the conditions of detention in this country so as to inform policy measures to ease congestion and generally improve conditions of detention,’’ he said.

The Minister said this when he paid an official visit to the Senior Correctional Centre in Accra to acquaint himself with conditions at the Centre.

Mr Dame said the prisons had been mandated to serve the primary purpose of reforming the detained during the period of detention, therefore, they were supposed to be provided with conditions for learning and improving their education.

He stated that the failure of the Prisons Council to discharge its constitutional mandate had been attributed to the overcrowding situation in the prisons, which a few interventions had addressed partially.

The interventions include the ‘Justice for All Programme’, which he said had contributed significantly to the release of various prisoners on remand, but could not solve the issue entirely.

Mr Dame said his office was working towards the introduction of the amendment to the Criminal Procedure Act, 1960 (Act 30), to integrate plea bargaining firmly into the trial of cases and the passage of an Alternative Sentencing Act, which would benefit the criminal justice system extensively.

He donated items, including toilet rolls, drinks, bags of rice, detergents, and boxes of medicines to the prison.

Mr Isaac K. Egyir, Director General, Ghana Prisons Service, described the visit by the Office of the AG to the prisons as timely as efforts were underway to reposition the Prisons to meet international standards.

He said such visits would help to ensure that human rights standards were upheld in the management of the prisons and in the treatment of inmates in line with international human rights instruments relating to prisoners, notably the Mandela Rules.

‘‘As a stakeholder in the criminal justice system, we will continue to work together with the other stakeholders for the better administration of criminal justice in the country,” he assured and appealed for the establishment of a central electronic case management system, with defined operational procedures, common to all criminal justice Institutions to help streamline processes to guide criminal justice agencies and establish responsibilities and guidelines for efficient service delivery.

He called for training packages for prison staff to enhance their professional capacities and support to electronically streamline database for effective linkages between the prison establishments and the Headquarters to facilitate speedy access to inmates’ records.